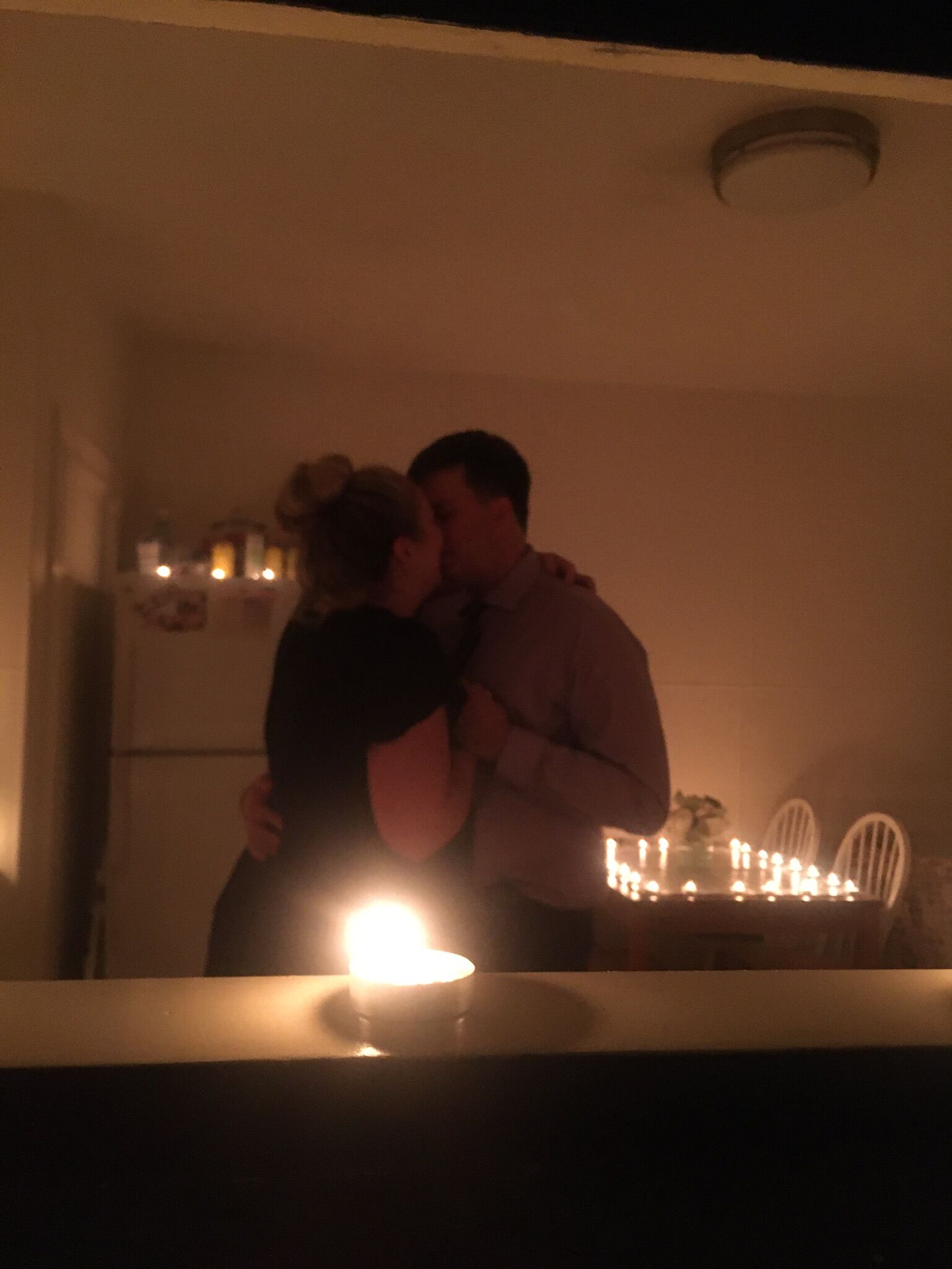 I had just graduated college and became a science teacher at a high school nearby. Brett was already working there as a math teacher. The first year we were just coworkers, even though we had crushes on each other. By our second year though we became work BFFs. We hung out at work and on the weekends. Even our students noticed how good of friends we had become. We both still never thought the other liked us. Students would joke about “shipping” us, turns out that’s high school talk for saying we should date. We always responded with “can’t guys and girls be friends without dating.” Obviously, they can’t… after a few months of hanging out almost every day my grandfather passed away and Brett was there for me. He knew exactly what I needed at that time and supported me through it. A few months later right before summer, we were out on the town when a couple came up to me while he was in the bathroom and asked me how long we had been together. I responded we were just friends and she said someone should tell his face that. I guess everyone else could see it but us. That night I made the first move and kissed him, he asked me to be his girlfriend after that. We’ve been together since!

Brett had been planning out a recreation of our first date on our 2nd anniversary to propose. Then Covid hit and the lockdown followed. This pushed back the plans of the proposal. Although I didn’t know it at the time he was ready with a ring and everything. After a few months of waiting, Brett realized the lockdown wasn’t going anywhere so he had to come up with a new plan. In our relationship, the kitchen has been the spot for many dates. On one of our first dates we made dinner together and while the dinner was cooking I taught him how to slow dance in the kitchen. Since then this has become a tradition and something we look forward to while cooking. Brett knew he wanted to make this slow dance extra special. I truly had no idea when my best friend called me to get dressed up and do mani/pedis that Brett was frantically cleaning our kitchen and setting up over 100 tea light candles. When I got back home I had no idea how special this random Monday was about to be. My best friend left quickly leaving me very confused, later I found out she was in on it. I got back to my front door and saw a letter. I opened the letter and I started to cry. In the end, he told me he had an important question to ask me. I walked into our apartment glowing from all the candles to him in the kitchen. He reached out his hand as our song “Say You Won’t Let Go” was playing and asked for this dance. We slow danced in the kitchen while my best friend was secretly taking pictures through the window. As the song came to an end he handed me a second letter. Now the tears were really flowing. I got to the end of the letter and it said: “I have a really really important question to ask you”. As I lowered the card he was on one knee in our kitchen with the ring open and asked me to marry him… he even remembers my full name which is a feat because I have five middle names! I just remember asking if he was sure and putting the ring on while shaking my head frantically up and down. It was the most perfect night in the most perfect location, where we have started our life together!

Home
>
Marriage Proposals
>
Tori and Brett
Proposal Videos
Check out some of our favorite proposal videos
Ring Quiz
Find the perfect ring for you!