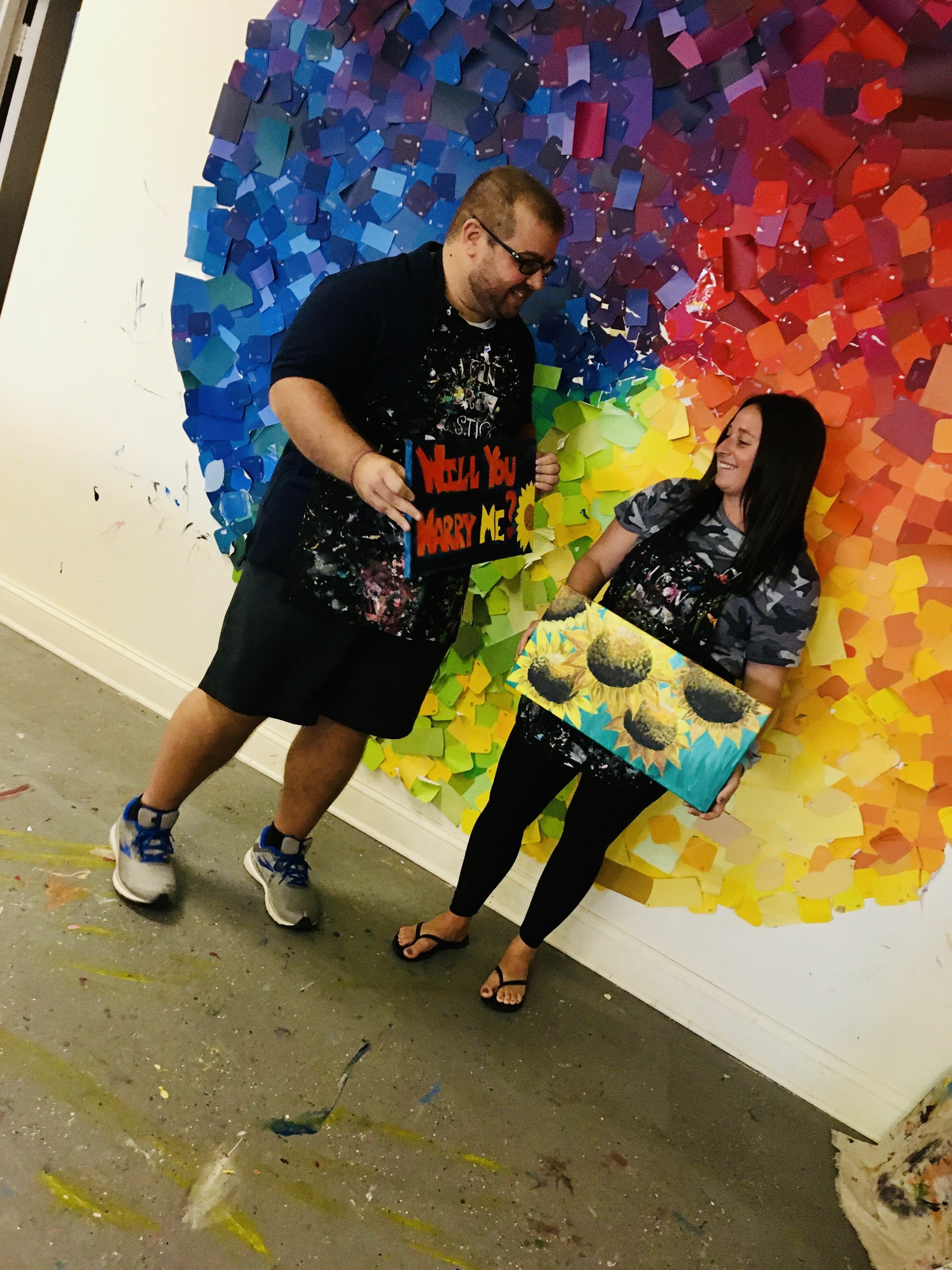 I went to college with TJ’s cousin Anthony and now we are coworkers. I was invited to Anthony’s wedding in December of 2018 and he mentioned to me about introducing me to his cousin TJ who was a groomsman in the wedding. So of course I naturally found TJ on facebook and tried to learn as much as I could about him before the wedding. Fast forward to wedding day and while I’m enjoying the party waiting for Anthony to introduce me I realize that Anthony is busy being married and that I would have to go and introduce myself to TJ. So I walked right up to him and asked him to dance, in which he looked at me, jaw dropped in shock, and couldn’t form a response at first without a little nudging from his fellow groomsman. TJ said YES to a dance and now the rest is history. A fun fact from the night we met is that I caught the bouquet. It was a small arrangement of fake flowers that I have held onto since that day. We plan to throw this same bouquet at our own wedding with the hopes that it helps bring whomever catches it love, luck, and happiness like it brought TJ and I.

TJ’s sister Sara invited TJ and I to go to a Paint and Sip with her and her husband Billy. It was just the four of us, which didn’t seem odd considering the COVID world we are living in, so I was just looking forward to a fun time. When we arrived I found out that we would be doing couples paintings where TJ would be painting the top canvas and I would be painting the bottom canvas. The painting was of sunflowers, which is my favorite flower. This should have been a hint that something was going on, but me, having no idea of what was to unfold that day was clueless to its significance. So we spent the time painting and having a good time. Being a very artistic brained person, of course I was taking forever to do not only my painting, but also helping TJ with his. All in this time not even noticing Sara and Billy on their phones taking phone calls in the background. At the end of the session we decided to take photos together in front of Spirited Art’s photo wall. Sara had TJ and I go first, so when we stood there in front of the wall TJ was holding his half of the painting off to the side which I found odd. So when he actually went and stacked his on top of mine, the sun coming through the windows made his canvas see through and then I realized that the canvas he was holding was not the one he had just painted. I realized then that something was going on and quickly posed for what I thought was a picture and when I turned around to face TJ and looked down at the canvas it read “Will you marry me?”. I was so shocked that the first thing that came out of my mouth was “Is this real? Is this a real question?” to which he got down on one knee and pulled out the most beautiful ring and asked me to marry him. I replied Yes!, and he put the ring on my finger, after I had offered him the wrong hand to put it on in the first place in my own excitement. I turned around to see both my family and his family on facetime who had watched the entire thing without me even realizing. My heart was running a mile a minute and we spent the rest of the day going to visit our families to share our good news. The whole day was a dream!

Home
>
Marriage Proposals
>
Rikki and TJ
Proposal Videos
Check out some of our favorite proposal videos
Ring Quiz
Find the perfect ring for you!