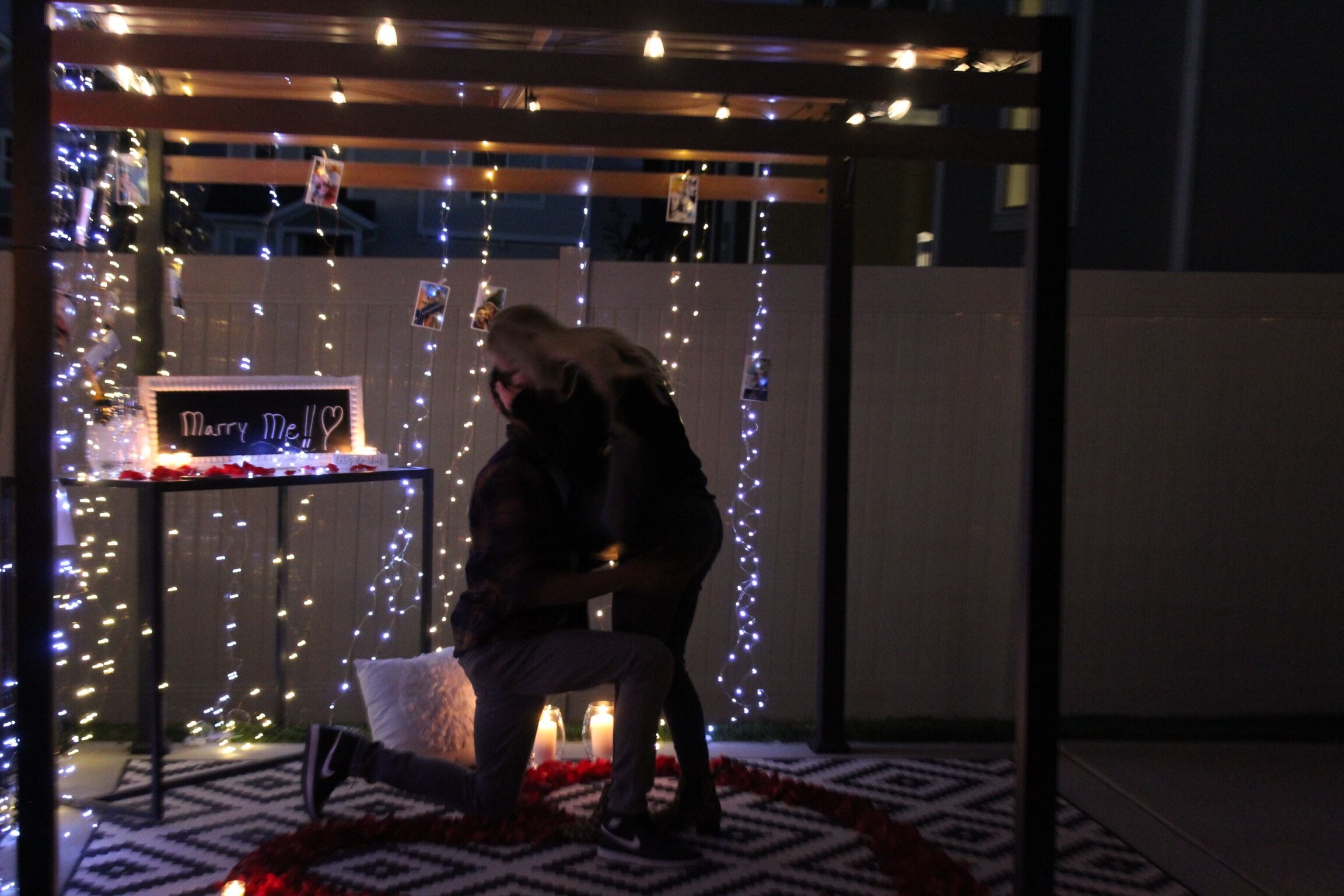 We met out on the town with our own set of friends. My girlfriend and I were at a bar getting some drinks when this Tall dark and a handsome man walked up to the bar side about 3 feet from us. I turned to my friend and said “That’s my future husband. 🙃” haha We always joked that we were going to meet our future husbands while we were out. So as I said that to her she jumped up as a good friend she is and said to him. “Hi, this is my friend Nicole”. After that, it was a done deal! ❤️❤️

Ohhhh where to start? I feel it’s necessary to add this pre-story to the story. Lol!

So the night before our proposal I had gone to get our dog from our backyard only to find he had shredded a down feather pillow… SHREDDED! Feathers everywhere. It looked like fresh snow everywhere. It was starting to get dark so I figured we’d get it picked up the next day. Well, my soon to be fiancé insisted he gets them picked up that night. Before he was finished for the night he was mowing the lawn in the dark. (Trying to get the lawnmower to pick up the feathers 🤪)

Turned out the next morning it had pushed them even further around the yard. He insisted they needed to be cleaned up right away. So we’re out there with a vacuum on our hands and knees cleaning these feathers up. Haha, I’m sure the neighbors were rolling watching us. So he comes up to me mid vacuuming & says “oh… we’ve got dinner reservations at 4:30 “ (in 1 hour) So I head up to get ready, then we enjoyed and delicious dinner at my favorite restaurant, tsunami sushi bar. Our ring doorbell had gone off many times for motion. So I had mentioned “the ring is going off a lot” he began to reassure me it goes off this much normally. Hehe well… when he went to the restroom. I received another notification for motion so I opened up my phone to find this panning back to the frame of him walking up to the doorbell and placing a piece of paper over the camera. Sooo sneaky. Lol, He came back to the table and we enjoyed the rest of our meal. As we arrived home he pointed out our ring doorbell having a piece of paper over it. He said “look at the ring, the neighbor girls must’ve put a paper on it” hahaha he had no idea I seen the video of him doing that himself. I died laughing! He proceeds to tell me he was going to go take the paper off and that he’d meet me inside.
I went inside through the garage only to come into the most dreamy setting. The floor was lined with dozens and dozens of roses and petals and candles all leading me out into the backyard where our song is playing and he is standing under our pergola that had string lights draped over all sides with pictures of us attached. Instantly tears rolled down my cheeks. He then asked me to marry him. 😭😭

This was the most romantic thing that’s ever happened to me. While we were at dinner he had our moms come over and set up what he had imagined for us. (Which was the motion notifications we were getting at dinner) ❤️❤️ It was intimate and perfect. He later said to me when he was brainstorming where to propose he couldn’t think of anywhere better than in the first home we bought 9 months earlier. ❤️❤️❤️