how they asked: It was just a normal Sunday morning. Naz awoke to me staring at her and she asked “what’s up?” I responded, “Nothing, I just can’t sleep”. Which in all honestly, wasn’t like a normal Sunday because normally Naz is awake tinkering with her phone for an hour or so before I get out of bed and make us coffee. Let’s just say I was a little nervous.

This Sunday was different I guess. Which totally contradicts how I started this post, but who I am to make sense on a day like this. I was about to ask Naz to marry me! Crazy huh? Who would’a thunk it?

The night before was spent having some drinks with some friends. Naz decided to go home early because she was tired and I decided to stay out and drink away my nerves. I asked our neighbor/friend Tyler if he would be willing to help me out with the proposal, he agreed. I wanted to totally surprise Naz, but at the same time I wanted to be able to document it. So I let Tyler in on my plan over a few Moscow Mules at the local watering hole.

I told him how Naz and I had met while working at the bar/restaurant just down the street from our house. Every Sunday there is a farmer’s market about a block away from there. We frequent it often and I figured this was the perfect place to totally catch her off guard. It was symbolic of where our relationship started and how it was going to continue to “grow” just like the fruits, veggies, and delicious hummus at the farmer’s market. Mmmm growing hummus!

So on our way home from the bar Tyler and I walked through the little park where they hold the Farmer’s market. I picked the spot where I wanted Tyler to be with the camera and practiced getting down on one knee. If anyone would have seen us acting out this proposal they probably would have been really confused by the half drunk guy on one knee and the other guy pretending to take photos of the action.

So the plan was set. We woke up in the morning and I rushed Naz to get ready as I convinced her we were going to my brother’s house to watch the Chargers game (Niners suck!). Right before we were about to leave I told her that my brother and fam had decided to go to church so we had some time to kill before heading over there. I said, “let’s go down to the farmer’s market and get some avocados and tomatoes so we can make guacamole to bring the Michael’s house”. To my surprise, she said OK and we were out the door.

Tyler the photographer was all set up down at the market with his hood, hat and sunglasses on looking like a weirdo randomly taking pictures of stuff. We arrived at the market and strolled through the booths and got to the end of the row of vendors to the spot where I had practiced getting down on one knee the night before. I was so nervous, I felt like I was going to projectile vomit my coffee all over Naz. I took a deep breath and said ” pretty mellow down her today, huh?” Naz responded “yeah” as she looked around the market. As her head was turned away, I dropped to one knee and said….. wait wait, first let me tell you what I had planned on saying, then I will tell you what came out of my mouth through the nervousness.

I wanted to say something along the lines of… “Naz, over the last 3 or so years you have become my best friend. The person I can count on to love me for who I am and who I want to be. You have pushed me to be a better person in so many ways. And even though sometimes you can be a pain in my ass, as I’m sure I am in yours, you’re the only pain I want to spend the rest of my life with. I love you so much. Will you marry me?” Pretty sweet huh? 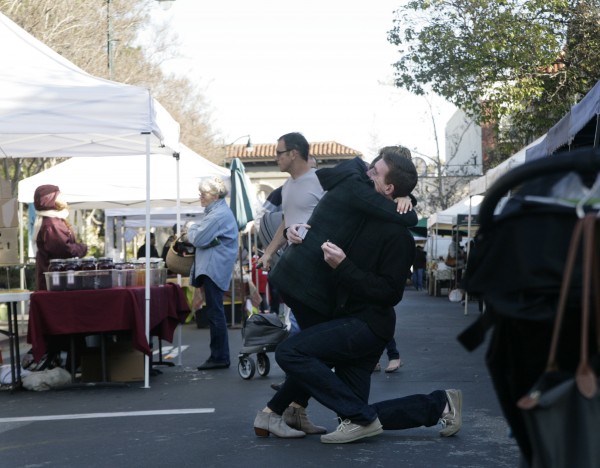 Well this is what actually came out of my mouth… “Naz, you are a pain in my ass, but I love you. Will you marry me?” Straight to the point! I guess I’m more efficient when I’m nervous.

After a few moments of tears and hugs. She said “Yes!” and I slipped the ring over her finger. Tyler captured the moment as the crowd of strangers started applauding from all directions. It was a success! She was totally caught off guard exactly as I had planned. I breathed a sigh of relief as random Los Gatos cougars started asking Naz to see her ring. Some woman said she was an engagement photographer and told us to stand in some awkward high school prom photo pose so Tyler could take a picture. I’m sure we were the story of the day for the farmer’s market folks as random people took photos and congratulated us.

We are so excited about what the future will bring for us! Feel free to read updates about wedding planning and our family at heregoeslife.com.