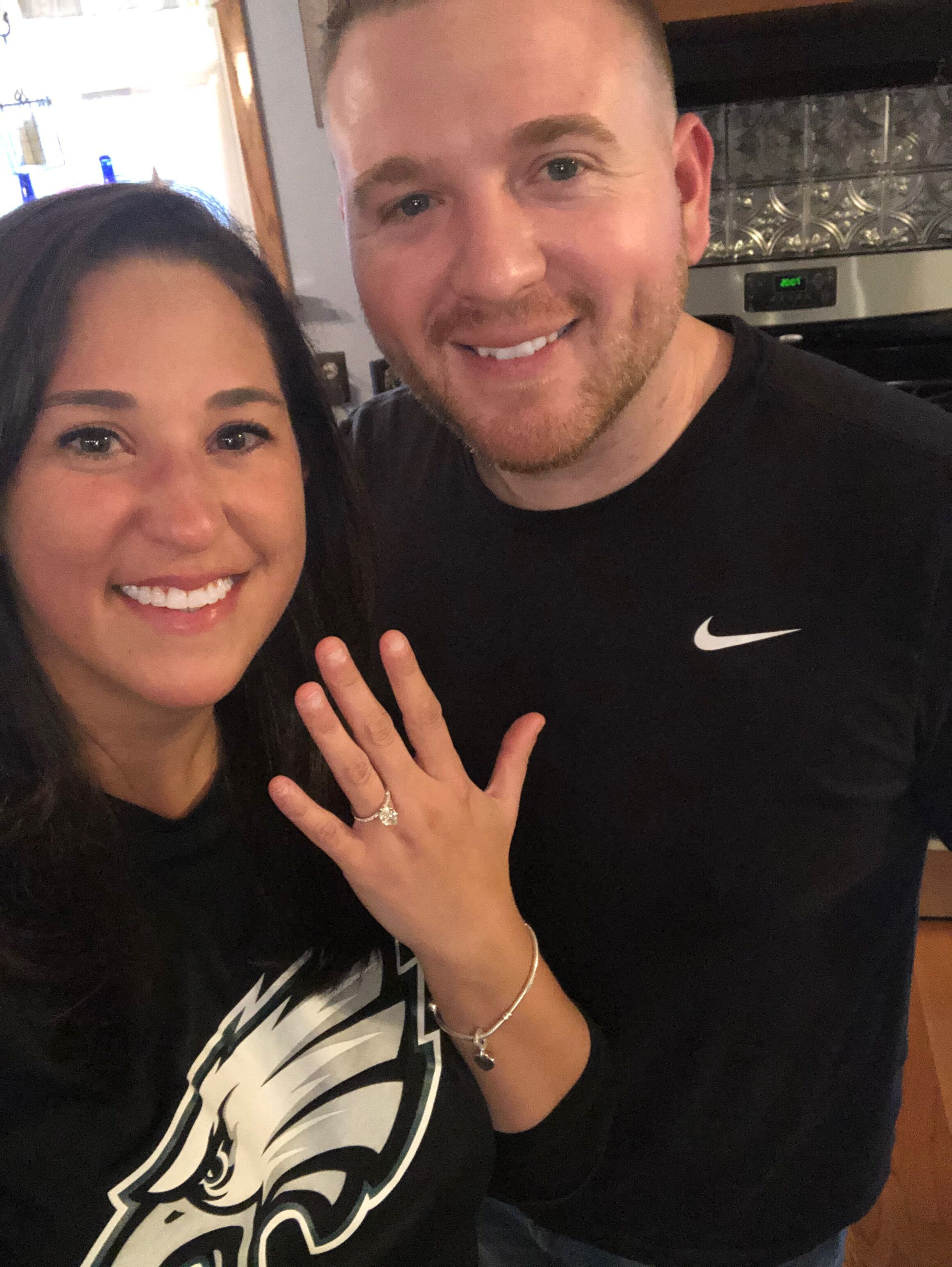 While swiping through Bumble, Melissa was intrigued by Michael’s photos of his fishing trips and his black lab, Hoyt. Similar to Michael, Melissa also enjoys fishing and spending time with her dog, Jaxon. Once they matched , it was obvious to Melissa that she had to message Michael (for those of you that don’t know, on Bumble, the women need to message the men first.) After talking through the app for a fews days Michael asked Melissa to meet up.
They first met in her territory on June 16th, 2018. Melissa knew Michael was serious when he eagerly volunteered to drive an hour to meet her- all the way to Pennsylvania. It was then that Melissa realized Michael was a true gentleman. Regardless of the fact that they were meeting for the first time, Michael was persistent that he wanted to get dinner. Melissa asked several times, “are you sure you don’t want to just get drinks.” She felt as if a whole dinner date was a bit of a commitment. She thought, “what if it was a bad date, what if Michael doesn’t look like his pictures, or even worse….. what if he’s a…. Dallas Cowboys fan?”

The two met in the parking lot of Miller’s Ale House, where they had planned to get dinner that night. They nervously walked into the restaurant and sat down at their table. Melissa was so nervous that she had to sit with him and make conversation for the entirety of a dinner! However, in just a few short minutes, Michael’s easy going attitude made Melissa feel relaxed and comfortable. And surprisingly, the conversation was so easy! She felt so comfortable that she even went on to order buffalo wings-who does that on a first date? The date made a turn for the worse when Melissa assumed Michael was an eagles fan and said “So did you go to the eagles parade in February?” Michael quickly replied with “I’m a Cowboys fan.” Fight or flight instinct took in and Melissa briefly wondered if she should run as fast as she could to her car but instead she stayed and gave Michael a second chance. Thankfully the date turned around and they agreed to see each other again.

Given the funny relationship that we share, a cowboys fan and an Eagles fan, Michael felt it was fitting that he propose during an Eagles/Cowboy game. He invited My mom up from Florida and spoke to her and about his plans. Right before the football game he got down on knee, in his childhood home, in front of our families and asked me to marry him! It was perfect!

Home
>
Marriage Proposals
>
Melissa and Michael
Proposal Videos
Check out some of our favorite proposal videos
Ring Quiz
Find the perfect ring for you!