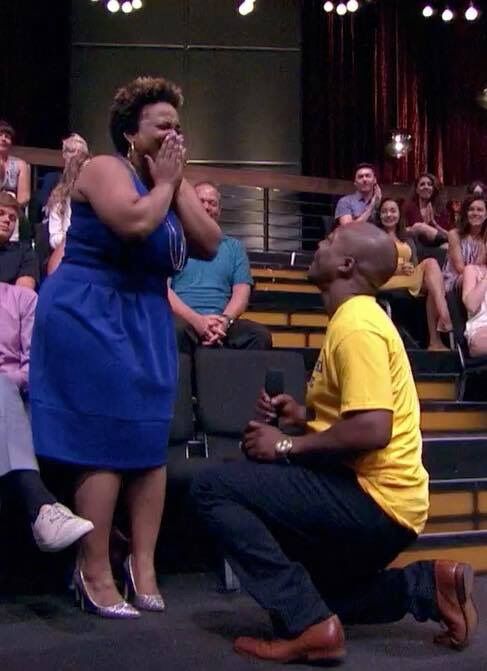 We actually met twice and didn’t know it. I first met him while he was delivering my furniture from Aaron’s. We exchanged numbers and talked for a couple of weeks. He was super busy all of the time touring with his band so I decided to cut him off. We met again two years later at Boston Market on a Sunday after church. I knew he looked familiar but didn’t know where I knew him from. He said the same thing. I just thought he was so cute. He said when he saw me walk through the door he whispered a prayer, “Wow. That’s her. God, if she’s the one give her to me.”

It was the BEST PROPOSAL EVER! He proposed on national TV, on the test pilot of The Kelly Clarkson Show!!!!!!!! OMG!!! He knew I wanted a grand proposal and he went above and beyond. I thought I had a casting call for the show to celebrate getting my Masters degree but secretly, he was working with the Producers to plan the ultimate proposal. On the show, after speaking to Kelly, she said, “But Bakari, you’re here for a different reason, right?” And that’s when it happened. He gave the most heartfelt speech (and made me feel like the most beautiful, luckiest girl in the world), song to me in front of millions of viewers, got on one knee and popped the big question. I was soooo shocked, excited, and in love. I didn’t realized I didn’t say anything while processing the moment that I think he had to ask me again. I was living a dream in the moment. Words can’t express how I felt/feel. When Kelly Clarkson’s live band came in behind his song, I nearly fainted. It was beyond epic!

Home
>
Marriage Proposals
>
Markeshia and Bakari
Proposal Videos
Check out some of our favorite proposal videos
Ring Quiz
Find the perfect ring for you!