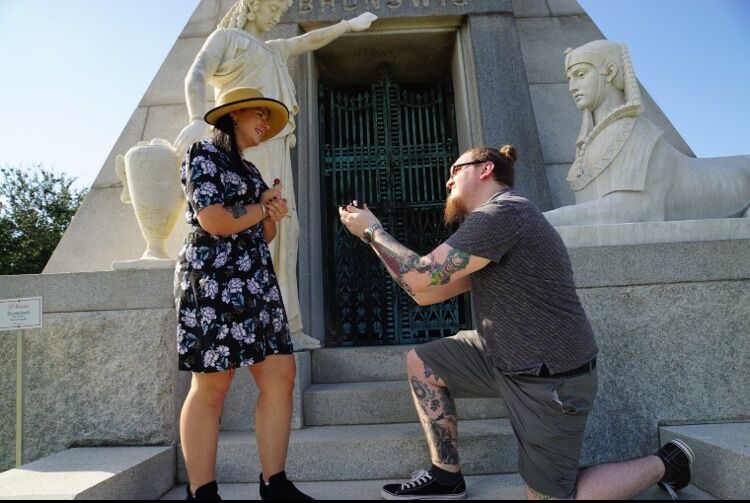 We met online 2 1/2 years ago though okcupid and we hit it off immediately! Our first date was at the house of blues in New Orleans on a bit summer night, we had dinner and went to go see some live music playing that night, it was really just us in the venue so we had a great time having drinks and getting to know each other, later after the show we made our way to burbon street and had the time of our lives! I’ll never forget that night.

We made plans to meet up with some friends and take pictures in Meterie cemetery for fun. It was a beautiful day, a real turning of the seasons, it was cool and breezy, just starting to cool down. We made our way though the cemetery taking pictures and having fun with our friends we eventually made it to a mausoleum he wanted to get pictures at. While he was taking pictures of our friends I went off to check it out, a few minutes later I feel a poke in the back and he’s down on one knee with a ring pop and a big grin! I always told him I don’t care what ring he gets me it could be a ring pop. So he gives it to me and tells me to turn around, and he pulls out the most beautiful ring I could ever ask for. I was stunned, lots of crying and hugging happened, we finished our day with dinner at the restaurant we first met at and had a few drinks with friends. It’ll be a day I’ll never forget.

Home
>
Marriage Proposals
>
Margaret and Hunter
Proposal Videos
Check out some of our favorite proposal videos
Ring Quiz
Find the perfect ring for you!