Jesse and Madeline met on the first day of Middle School when they saw each other’s moms speaking. She says, she still remembers the orange Aeropostale t-shirt he had on. Jesse could not tell you what she was wearing, he was ready to get back to his hacky sack game. Throughout the year, Madeline had the biggest crush on him, but he only could describe her as the “overly hyper one.”

Within the next year, Madeline transferred to another school and endured the endless teasing from her cousin Olivia calling her “Mrs. Aldridge.” As fate would have it, they eventually met again. This time, Madeline wanting absolutely nothing to do with her previous middle school crush, but Jesse intriguingly now wanted to get to know who this “hyper girl” was. Of course, this had nothing to do with what some would call a high school glow up. Planning an engagement is usually tough enough without your future fiancée finding out, much less throwing a world pandemic in the mix. Little did Jesse know when he started planning this in January that this would become much… much….harder…
Fast forward to May1, 2020. Jesse and Madeline have made plans to have dinner with T.J. and Natalie. This will be their first real outing since the COVID-19 outbreak. Madeline has decided she has changed her style to no makeup, total athleisure wear 24/7, refusing to go to the nail salon to get her nails done-don’t even mention a curling iron. Needless to say, Jesse had quite the task of getting her ready for this big moment without her becoming suspicious. 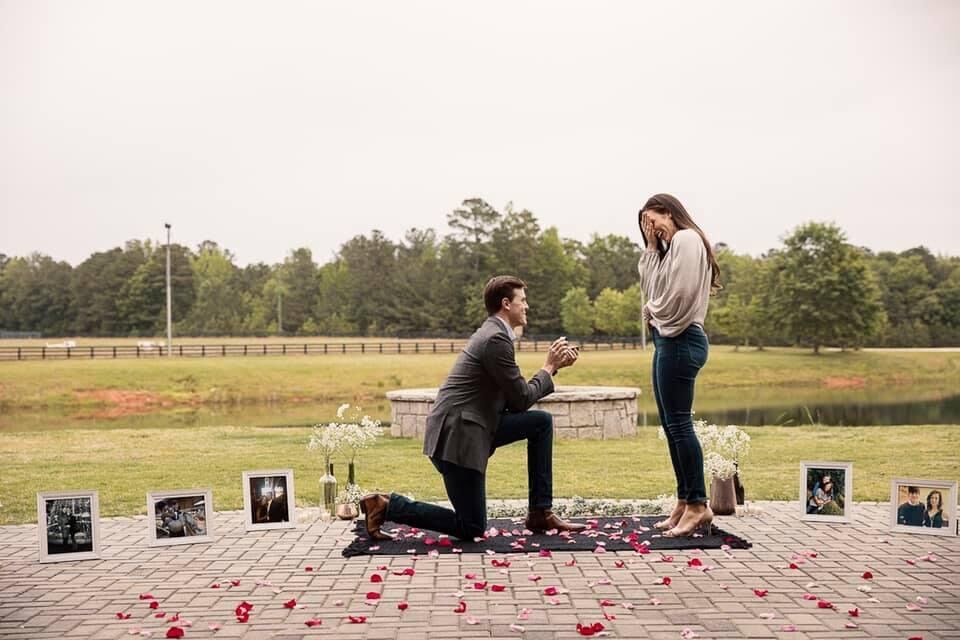 The few days before they took the trip down to Georgia, Jesse helped Madeline pick-out an outfit to wear to dinner. Madeline wondering “what’s the big deal” it is just T.J. and Natalie? With this thought in her mind, she left the outfit at home. Jesse finds this out upon arrival at her mom and dad’s house and tasks her mom with getting her dressed and her nails done. After basically dragging Madeline to the store, momma Donna had accomplished the task.

The day of, Madeline got ready and went with Jesse to go see his newest nephew, baby Anderson. Once Jesse and Madeline arrived at the destination, The Paddock at Fox Hall, Jesse began to walk through an empty building, causing Madeline to think “What is wrong with him? I’m usually the one to do stuff like this”.

After walking through, she notices the proposal setup and says, “oh that’s pretty”. Jesse asks her to take another look and that’s when it hits her: Oh. My. Goodness. This is really happening.

After the most special and thoughtful proposal anyone could imagine, Jesse proceeded to say, “there’s more.” Inside watching from afar were their closest family and friends, and yes their intended dinner date companions.

Oh, and in case you are wondering, she said YES!

Home
>
Marriage Proposals
>
Madeline and Jesse
Proposal Videos
Check out some of our favorite proposal videos
Ring Quiz
Find the perfect ring for you!