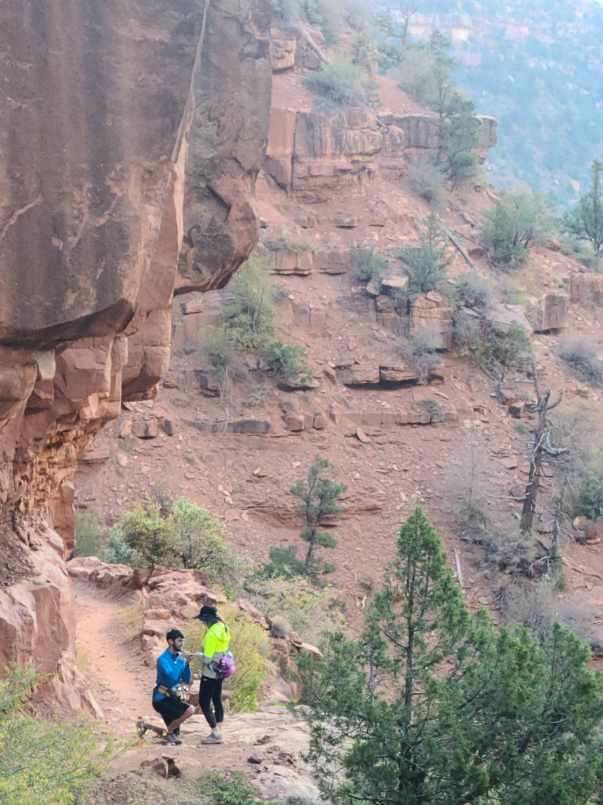 We met at a 5k that I was running with a friend from work. He is her brother-in-law and she’d been wanting to set us up for a while. After that, nearly a year passed before we crossed paths again. I moved closer to where he lived and we started seeing each other more often, and eventually started dating.

I was invited to go on a family RV trip with them, with the main goal being to hike across the Grand Canyon, Rim-to-Rim in a day. So, 8 people piled into an RV and drove from Tennessee out to the South Rim of the Grand Canyon after weeks of preparation for the big hike. There were bumps along the way, such as my inability to sleep well in the camper, but we made it to the South Rim late one evening and got at 5:30, so we could start at sunrise. It was gorgeous, watching the sunrise as we descended into the canyon. About an hour into the hike, we had gotten a little ahead of the rest of our group (his dad, brother, and sister-in-law [who set us up]) and he stopped at an over look and said “I think it’s snack time.” I was confused as he reached into his pack, since I knew my pack had our snacks, not his. I got more confused as he pulled out a Flintstones Vitamins box. Things started to make sense when the ring box came out of the Flintstones box.

Home
>
Marriage Proposals
>
Lorrie and Nathan
Proposal Videos
Check out some of our favorite proposal videos
Ring Quiz
Find the perfect ring for you!