How We Met: Sam and I have known each other for 11 years. We met at our church, we were just kids. When we were around 15, we became pretty close friends. Sam actually told me he liked me at that time, but I was in my own world and didn’t want a boyfriend. Well, fast forward to when we were 17. Sam had just gotten back from three months of boot camp for the Marines, and I was starting my senior year of high school. He had a 10-day break after boot camp, and that’s when our love story really began. During those 10 days, we talked non-stop. We really got to know each other on a deeper level during that time. I couldn’t eat, sleep, or think straight. My heart was always racing, and I had never felt this way before around him. Then, the day before he left for three more months of training, he told me he liked me again. I told him that I liked him too, but I didn’t want a relationship (why was I so difficult?). The next day, when we hugged goodbye, we decided that we liked each other too much to not give it a shot. So our relationship began, and he left to North Carolina.

Starting off our relationship as long-distance was not the easiest thing. We fought a lot, because we were both had never had a real relationship before, and we were two different people who had to learn to respect each other’s needs…all while being apart. But we knew that if we could survive being apart for a little while, our love was real.

So that’s how it began, 3 and a half years ago.

Since then, we became each other’s best friends. We’ve learned what it means to love unconditionally and to support one another. Over the past 3.5 years, we’ve hit some awesome milestones – Sam got his bachelor’s degree at 20, got an amazing job offer, and I’m finishing up college. We’re enjoying being young and in love.

how they asked: Before we decided on getting married, Sam and I wanted to make sure we were stable enough to do so. Once everything started falling into place, I had a feeling that we were going to get engaged this year..AND WE DID! 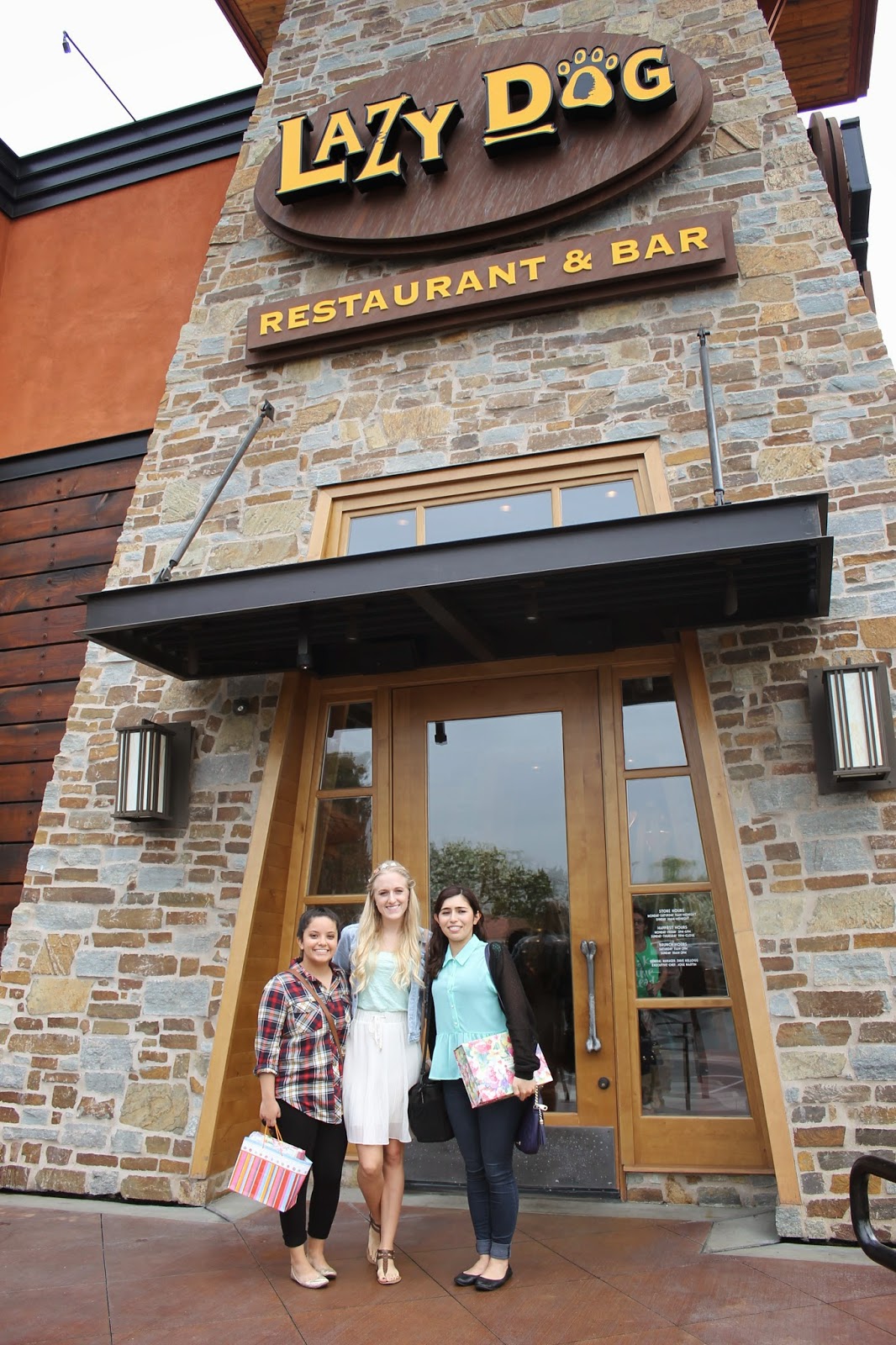 Here’s how it happened…Well, my day out started at my friend’s birthday lunch! We went at 2 PM to the restaurant, and had a great time! Little did I know, my friends were in on the secret. They apparently stalled the waiter from bringing us our check, so that we wouldn’t arrive at the proposal location too soon. I really didn’t think anything big was going to happen after lunch. We were all supposed to go back to my house to bake! We finally go outside the restaurant after lunch, and my friend randomly wants to take a few pictures of us all (she was actually trying to capture my reaction of what would happen next)

…but it took me about a minute to even notice the limo that was parked right in front of us. I think I said something like, “You’re kidding me…That’s not for me, is it?!” and sure enough, the driver pulls out a sign that says ‘Leah Johnston’. I was so in shock! I slowly walked toward the limo and kept asking my friends questions like, “You’re not leaving me, right?” and “Where are we going?”

The limo ride was a fun experience! It took me about 10 minutes into the drive to shake off the initial shock that I was in, and I started to get really excited! My friend gave me a bag with a new dress and nail polish (bought by Sam), some shoes, and then told me to get ready! This made me even more anxious! I got dressed, we blasted some music, and my friends made me cover my eyes so that I couldn’t see where we were going. 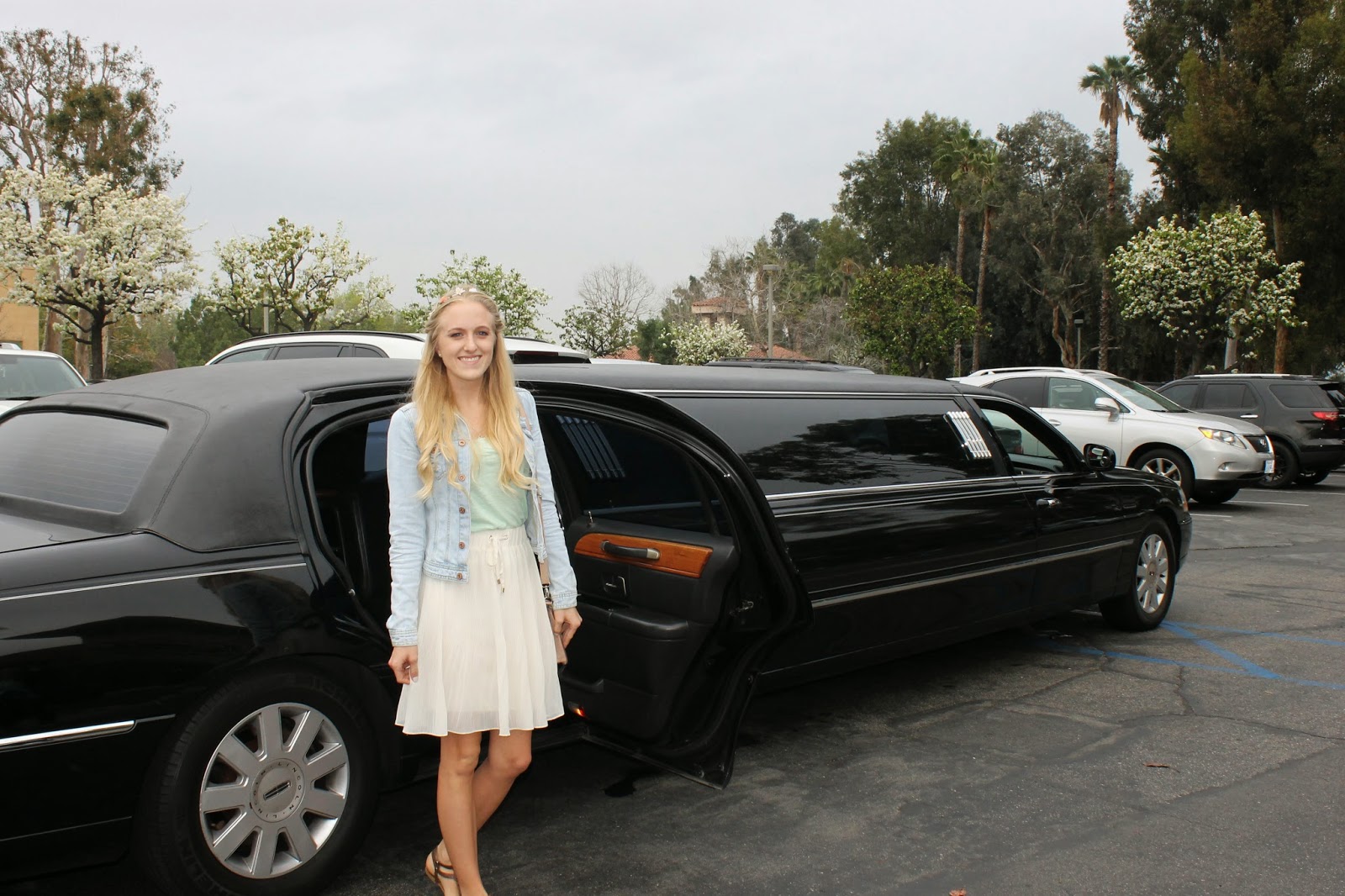 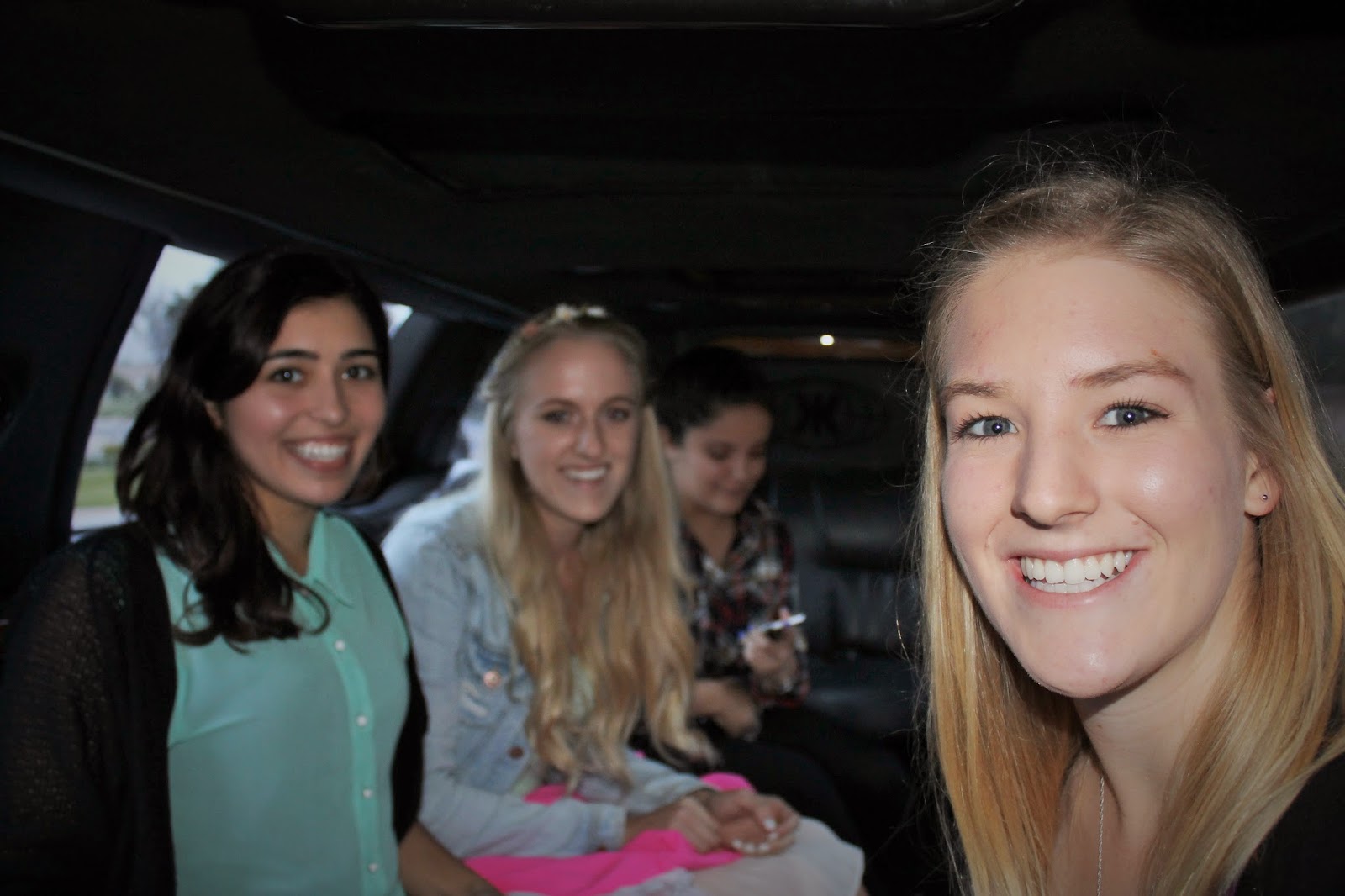 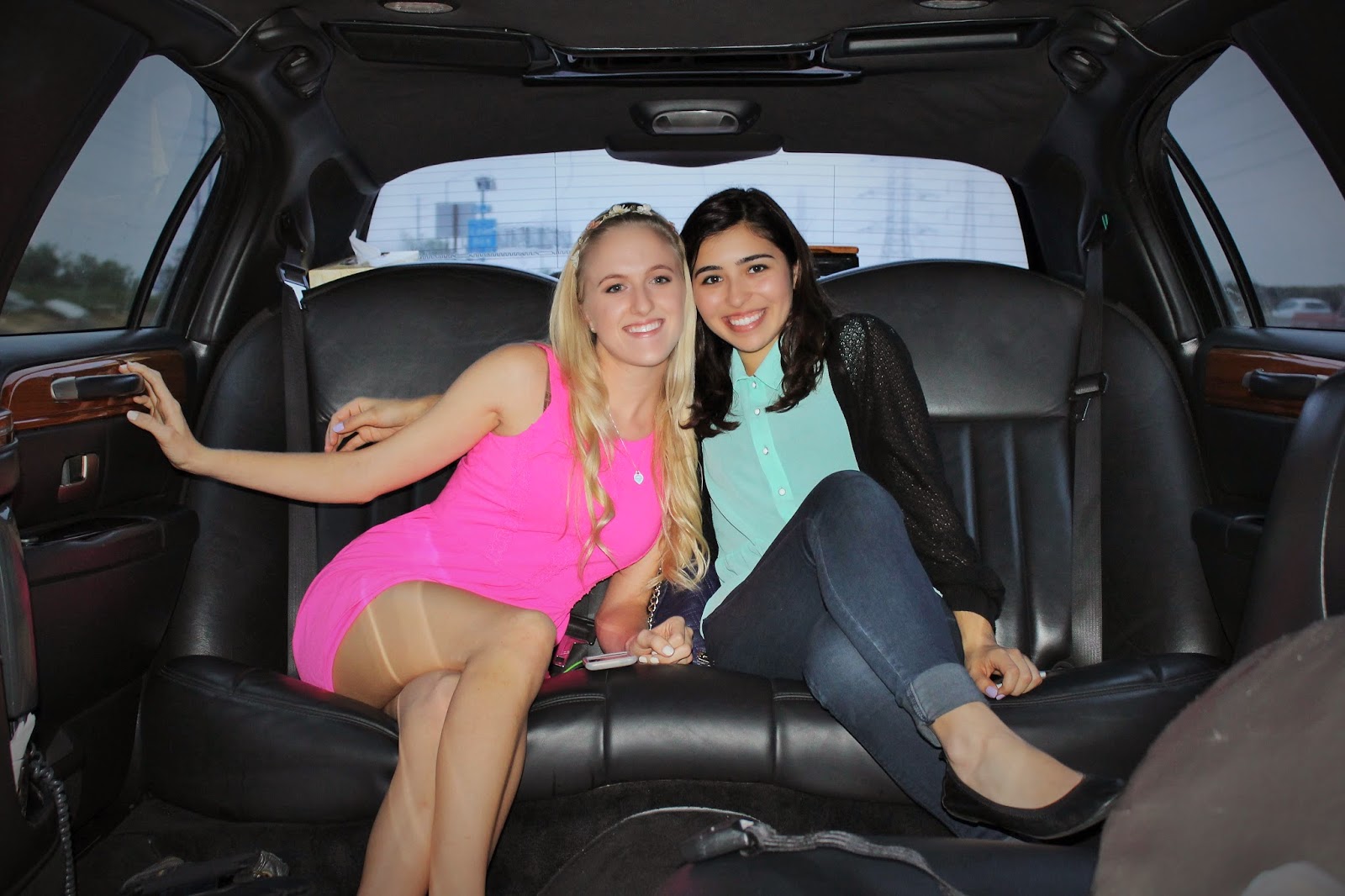 When we got closer to our destination, my friends were adament that I absolutely did not peak to see where we were (I’m kind of nosy) – but I listened! When the limo stopped, I heard them all get out, and I felt someone slide in onto the seat beside me. I took off the sweater that was covering my eyes, and yep – it was Sam! I hugged him, and then he took my hand and led me out of the limo. Once I saw what was in front of us, I stopped and immediately started crying. If you know me, you know that I hardly ever cry…so this was kind of a big deal. 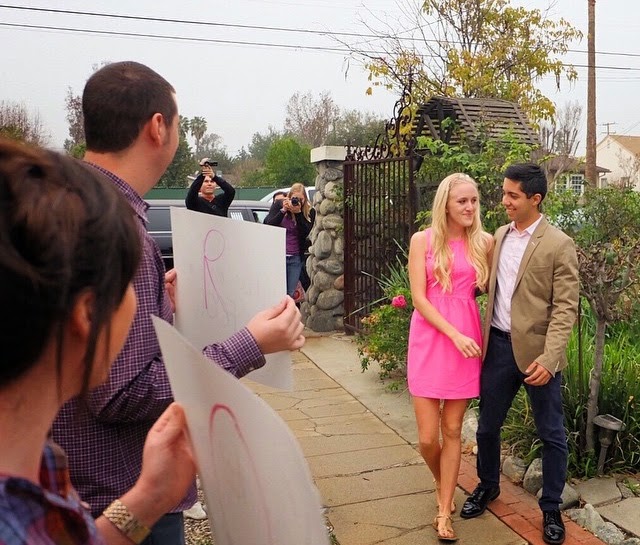 We had arrived at Sam’s grandma’s beautiful house, and along her driveway was a line of the people who mean the world to us! Our families and friends were standing in a line, holding signs that each said a reason why Sam loves me. We slowly walked past them and I was crying the whole time as I read them. 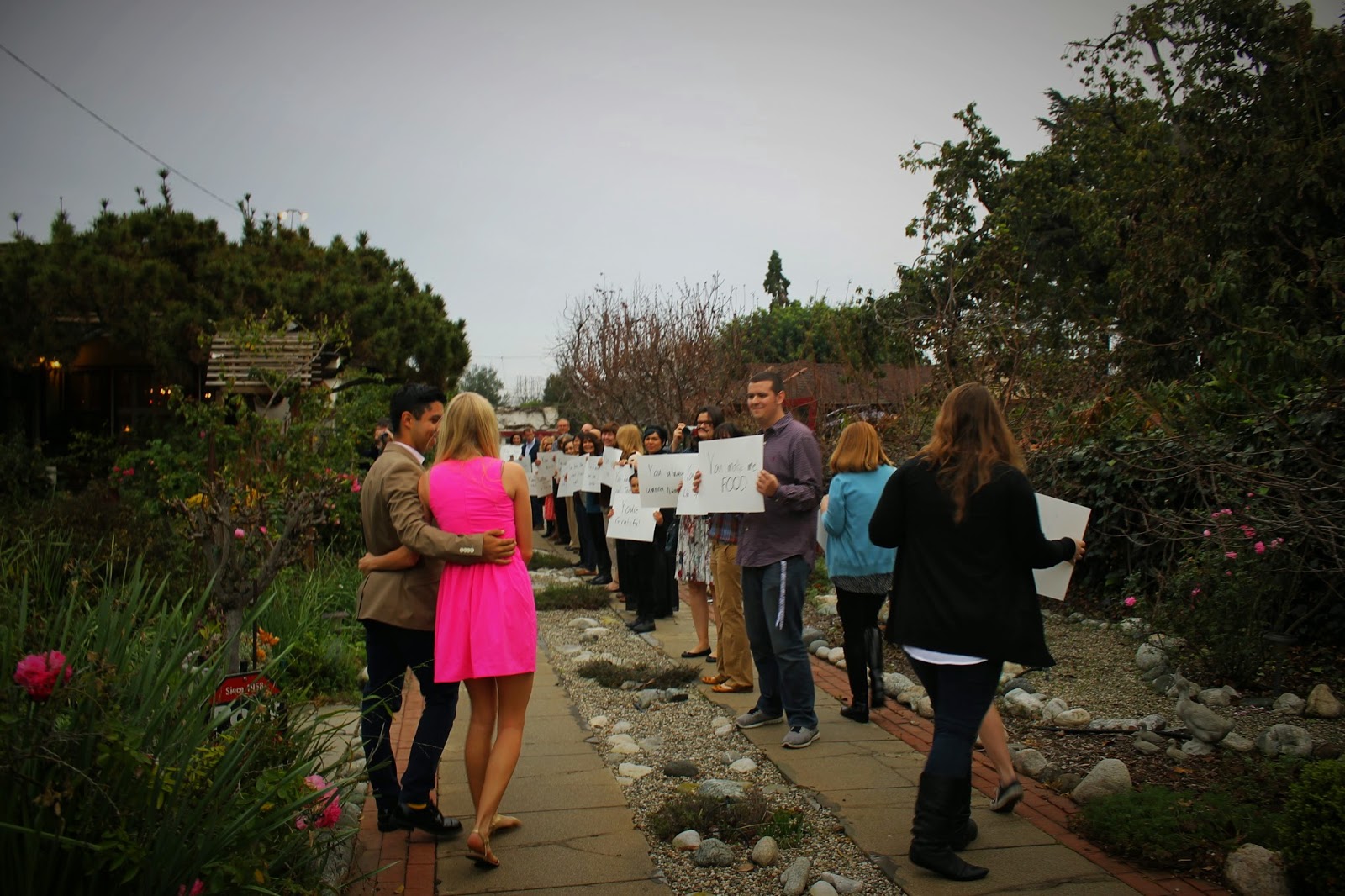 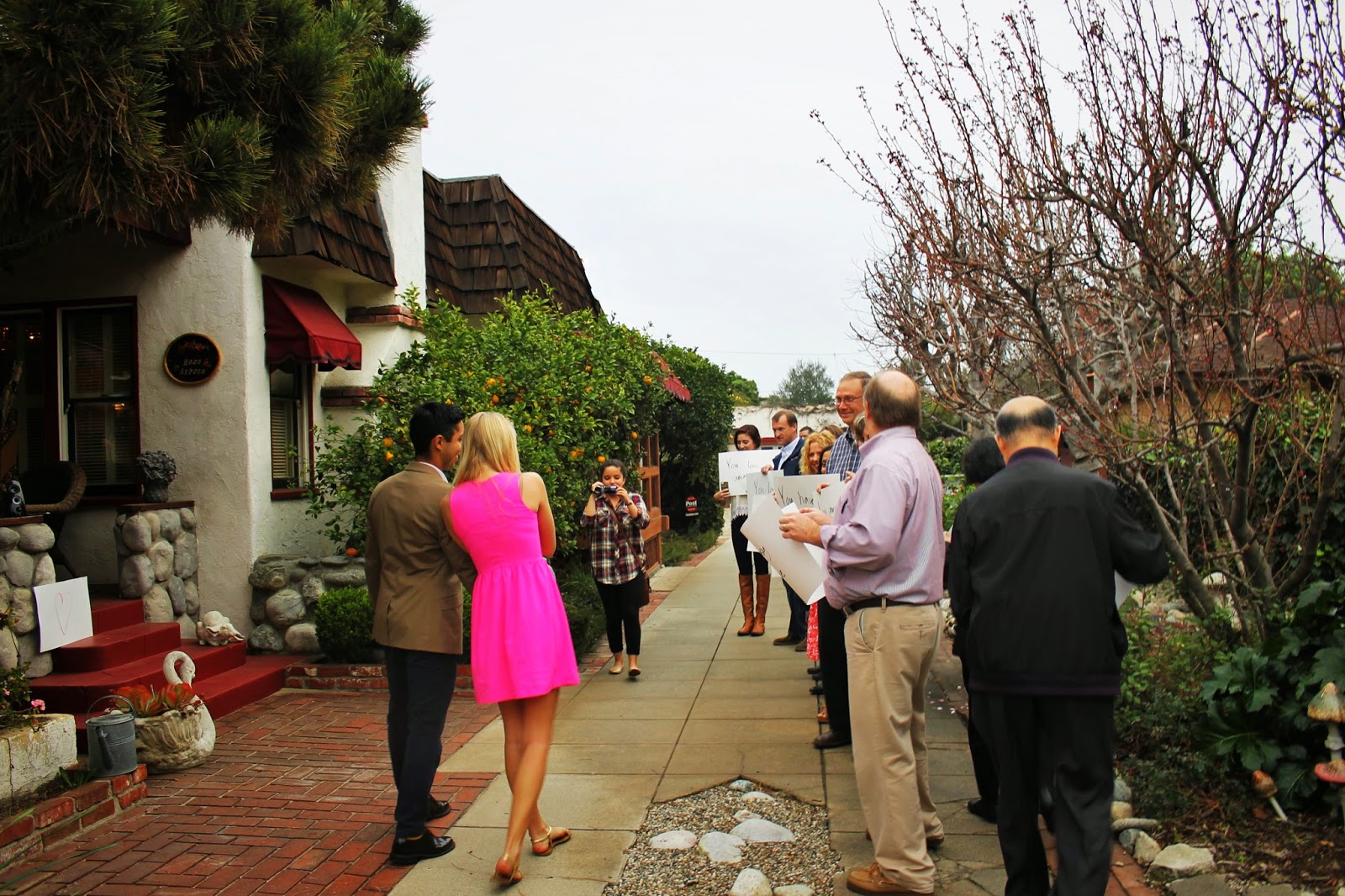 Once we got to the end of the line, they had formed a new line – each holding a letter that spelled out, “Leah, will you marry me?”. At this point, I was a bit of a hot mess of tears (but apparently so was everyone else).
So many emotions were filling my heart as Sam led me on a path of rose petals to a part of his Grandma’s backyard where there is a small bridge. Also, it was sprinkling out which is my favorite weather! He got down on one knee, opened the ring box, and said, “Leah Rose, I’ve loved you for so many years. Until now, the happiest day of my life was when you told me you liked me back. You’re such a special girl and I appreciate every little moment with you. I’m so excited for the rest of our lives together. Leah Rose Johnston, will you marry me?” 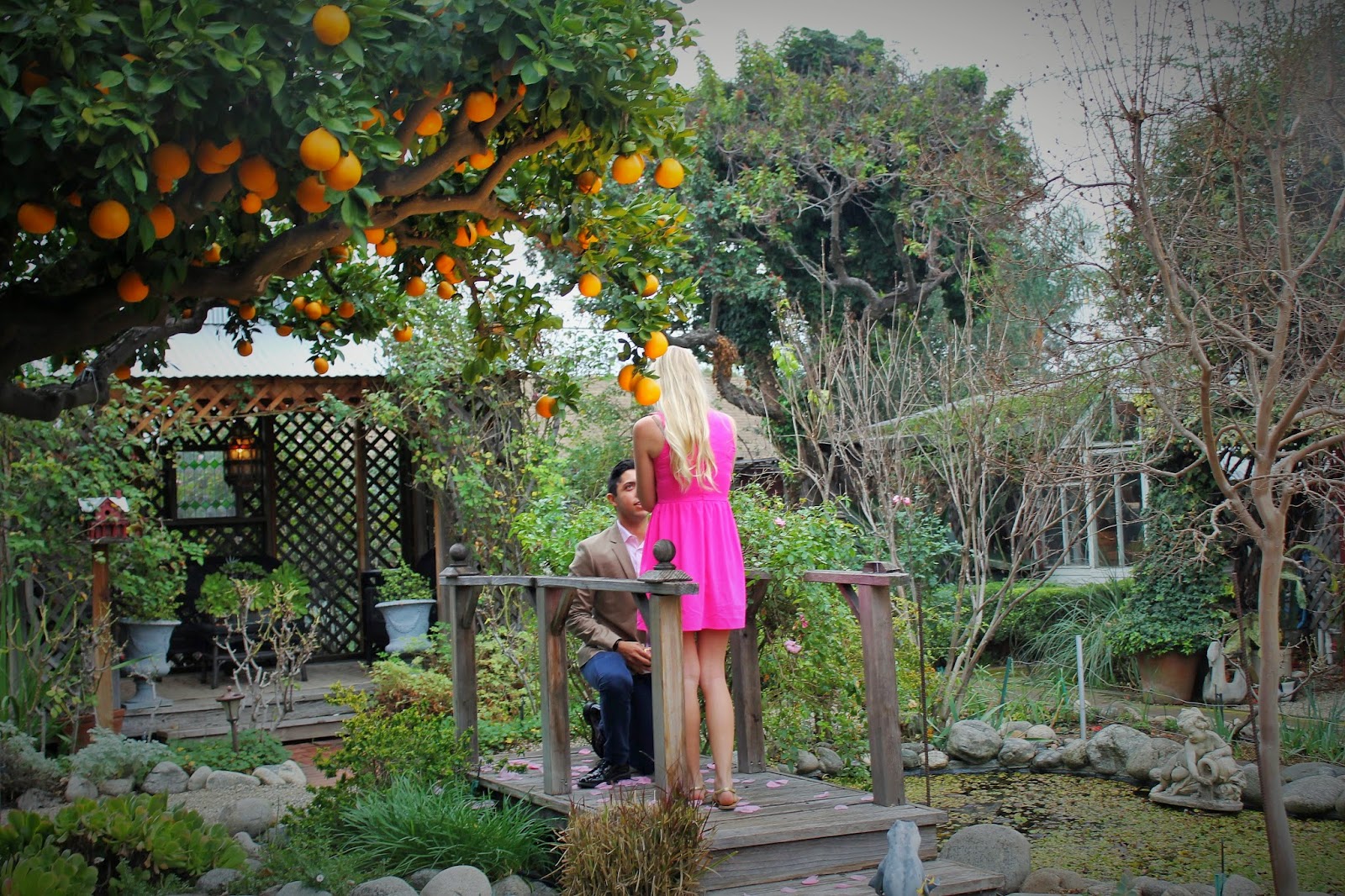 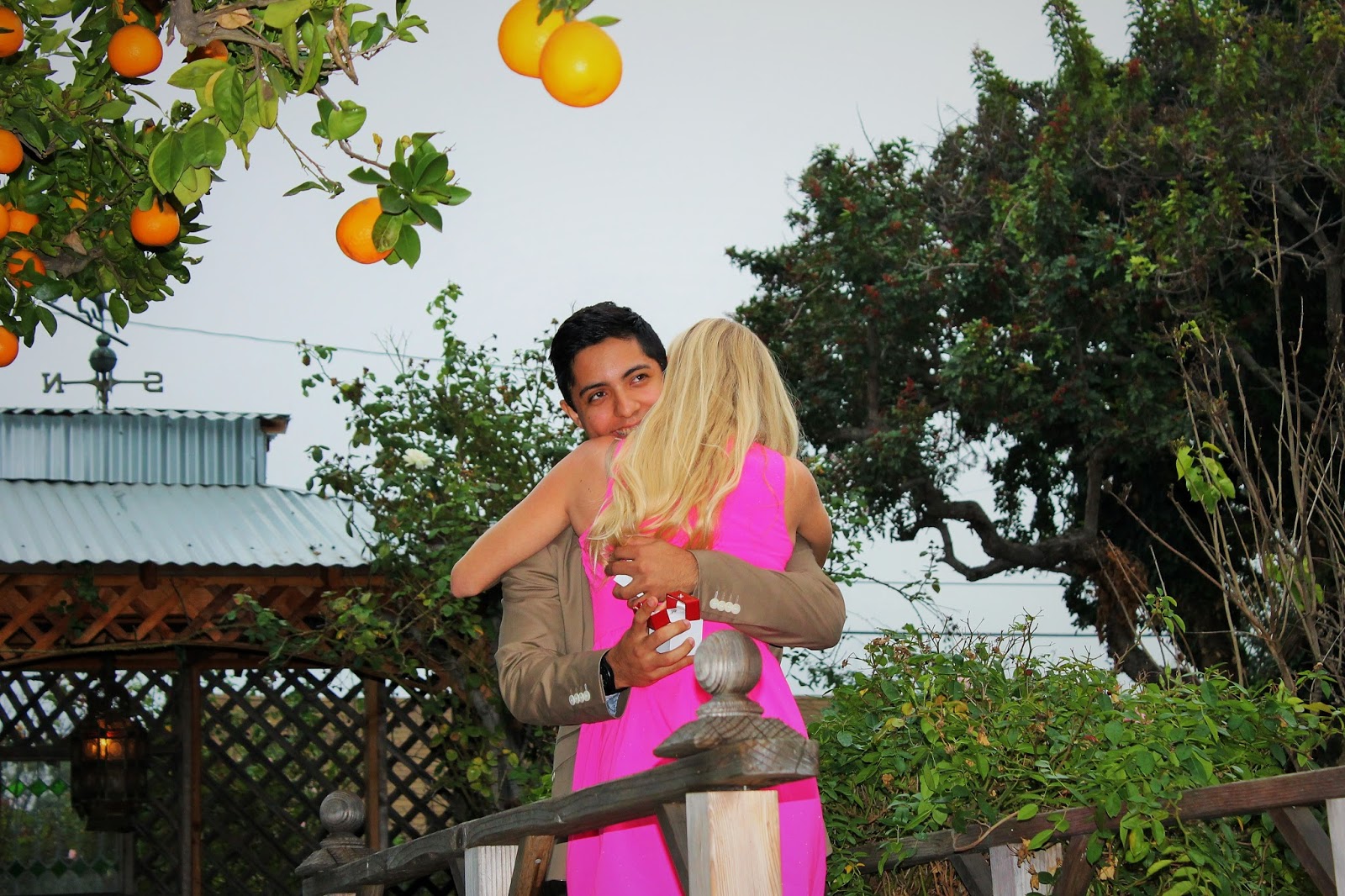 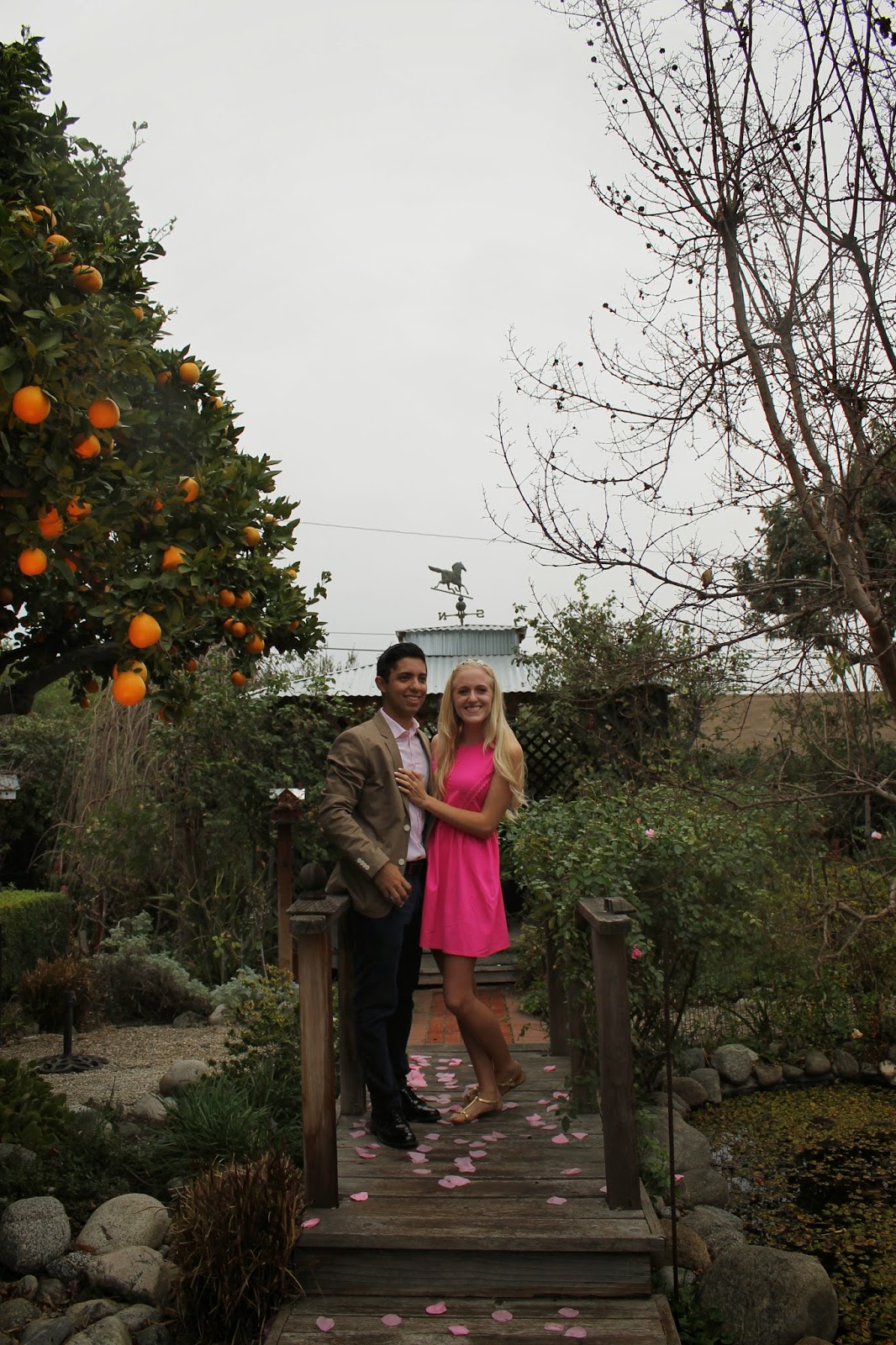 I obviously said “YES”, and then he stood up and put the most beautiful rose gold ring on my finger!
We waited a little bit, and then we walked back to the driveway where everyone made a tunnel of sparklers for us to run through! Then, everyone began to light the paper lanterns that Sam got, and let them float up into the air! I had told Sam a long time ago that I’ve always wanted to see paper lanterns in the sky, so this made me extra happy! He also gave me a beautiful bouquet of roses to top everything off. Seriously, is there anything this man missed? He is AMAZING! 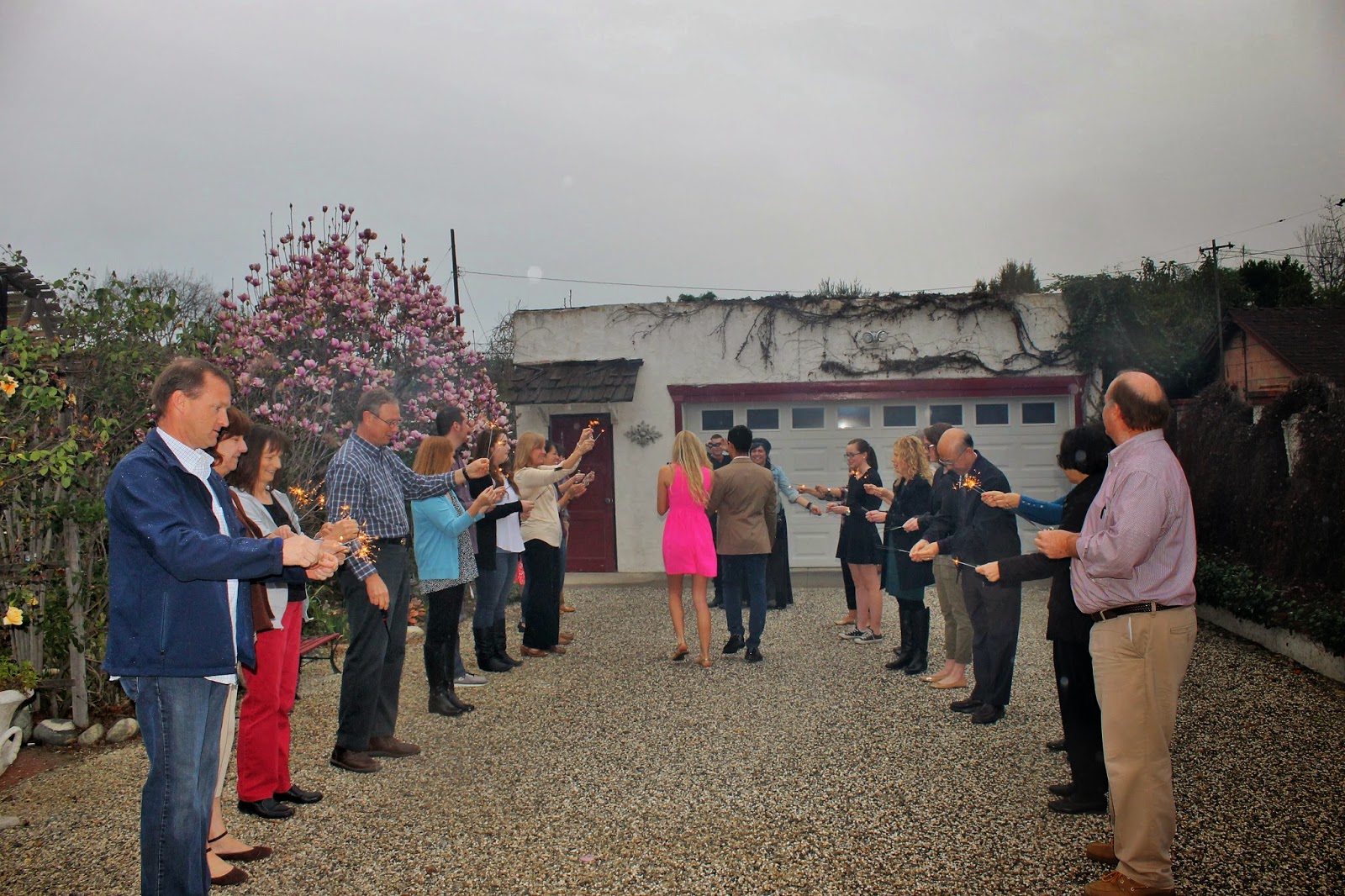 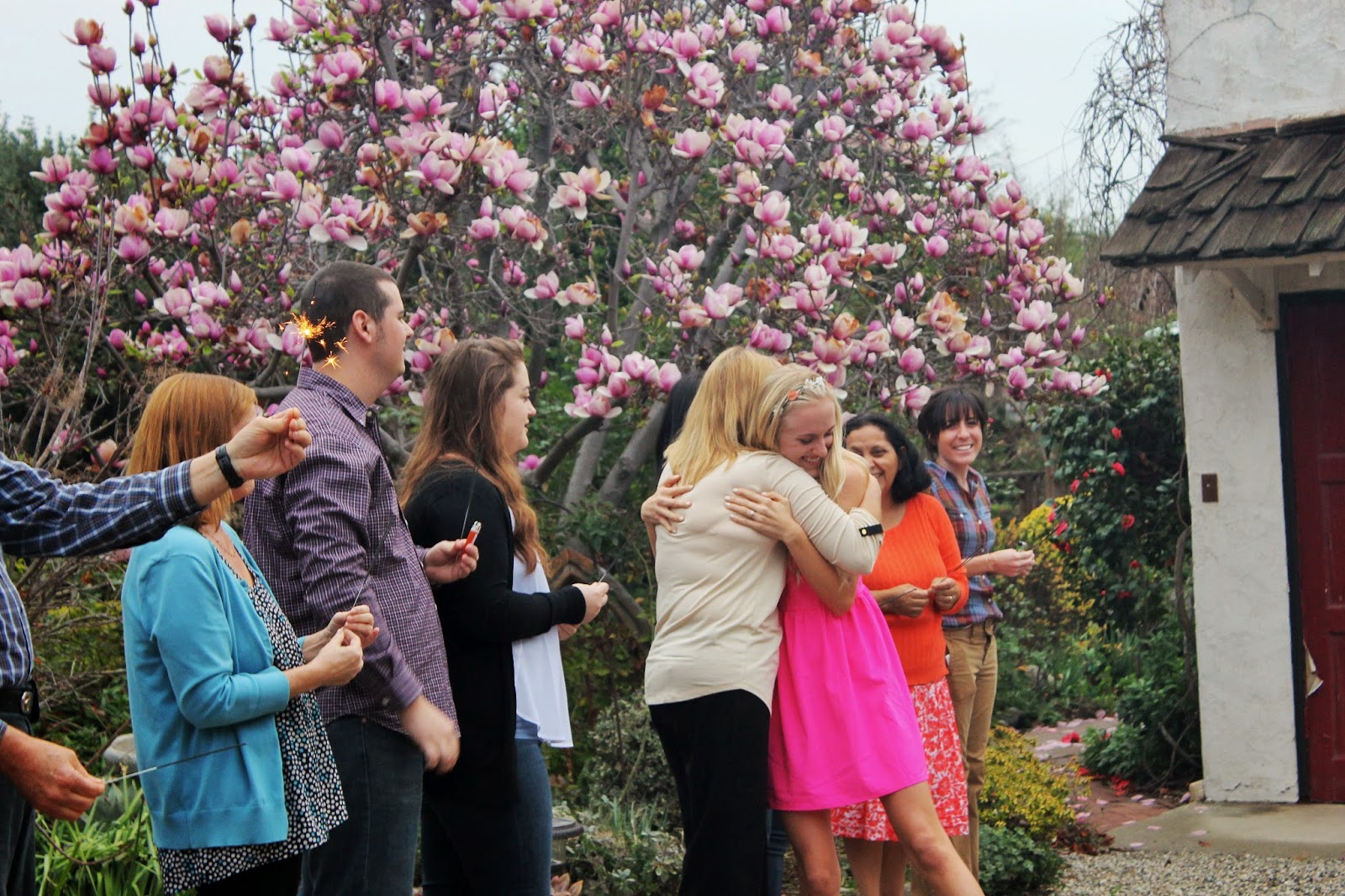 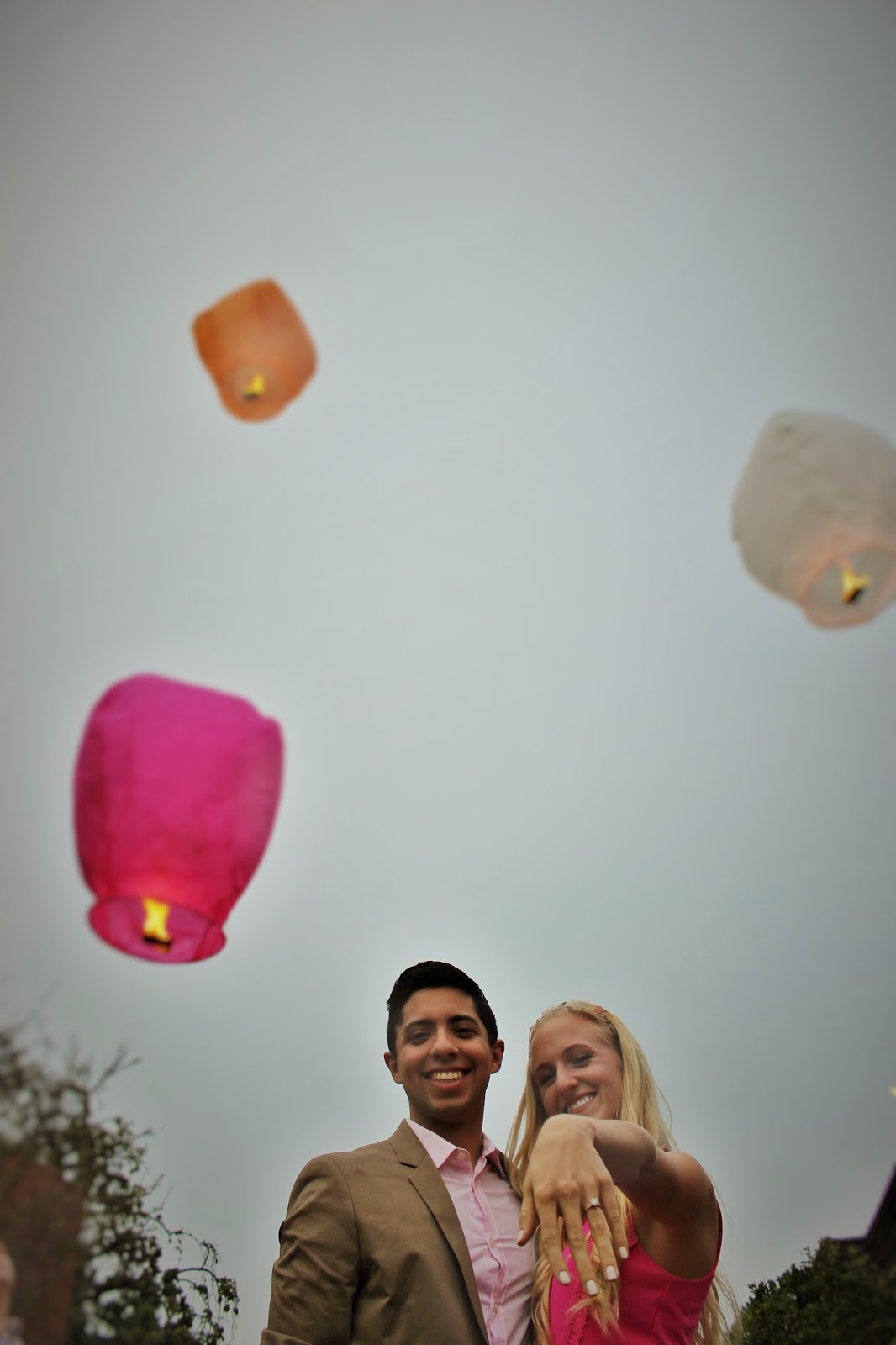 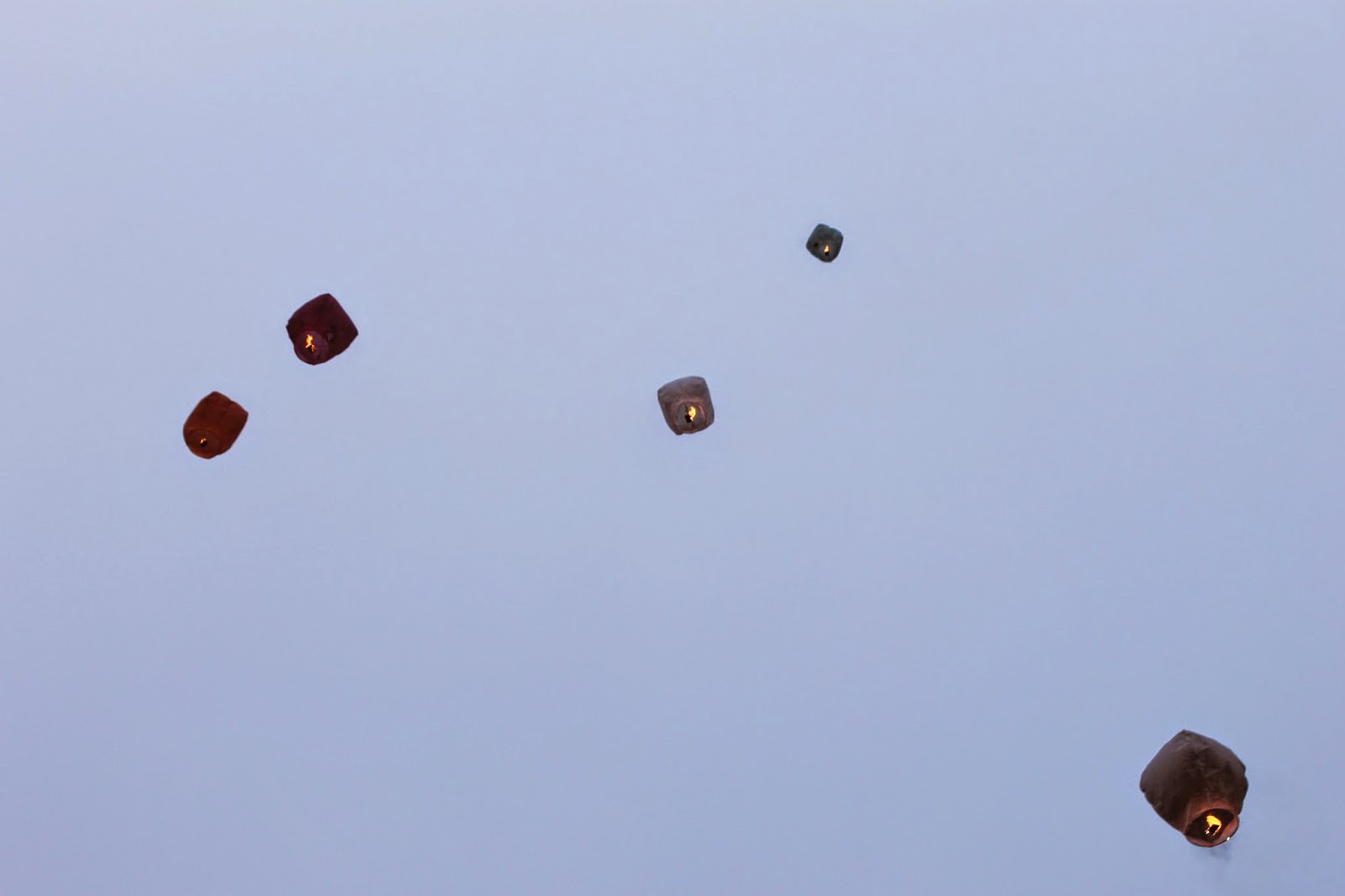 It was so amazing having our friends and family there to celebrate with us after! We all went inside and had dinner and cake! 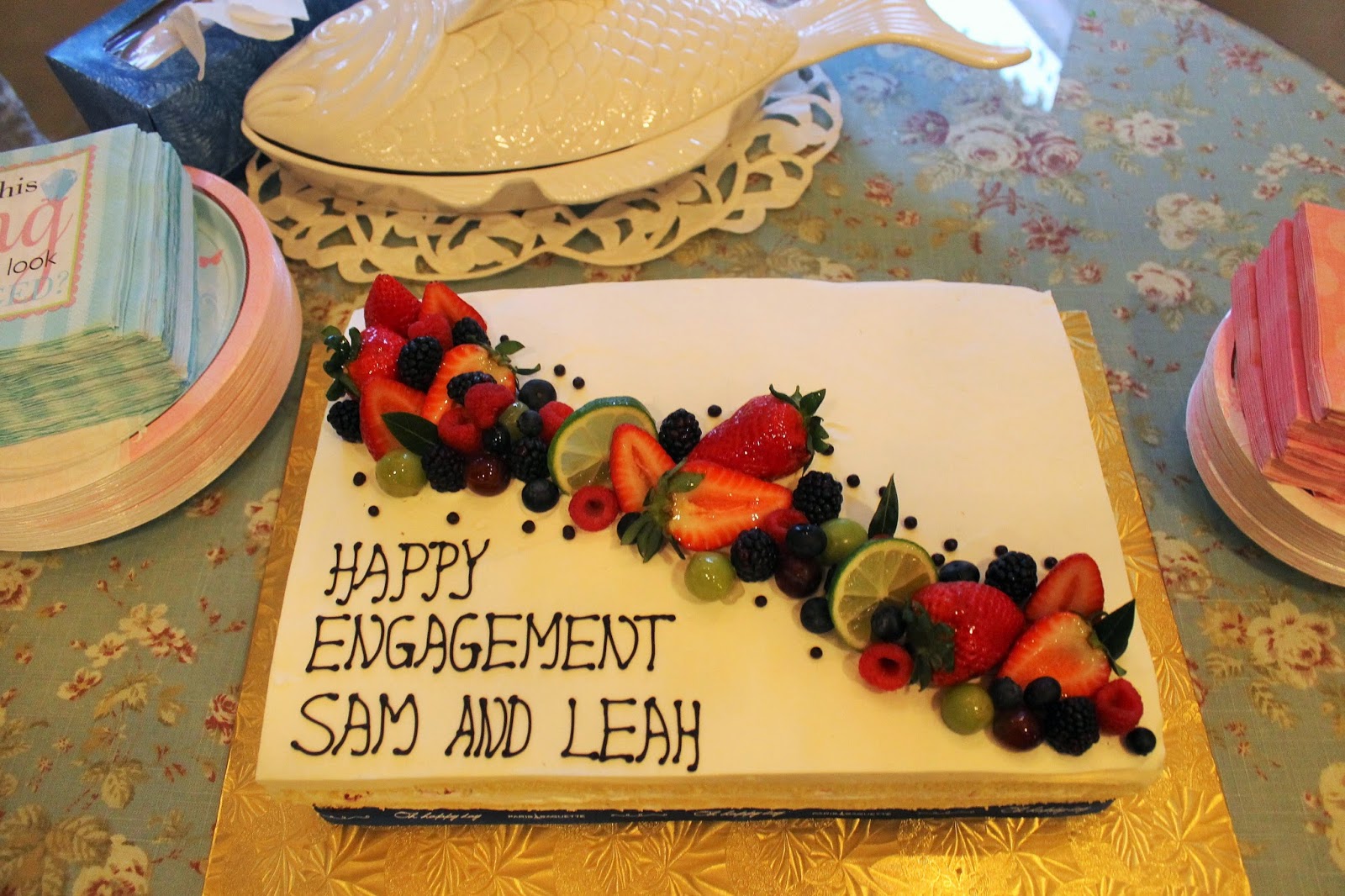 Home
>
Marriage Proposals
>
Leah and Samuel
Proposal Videos
Check out some of our favorite proposal videos
Ring Quiz
Find the perfect ring for you!