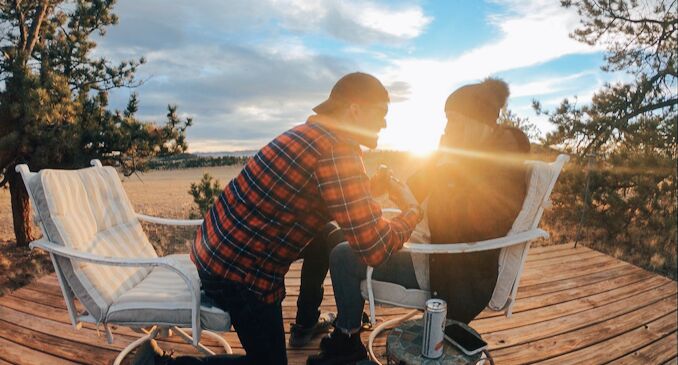 I was Cole’s first (and only) bumble date! I’m from upstate NY and moved to Texas in 2018. Bumble was old news to me – I’ve been on my fair share of unsuccessful dates. Cole and I matched on a Friday night (I remember sending the message thinking “it’s Friday night he must be out with his friends he won’t answer me – and I got a message back within minutes!) and he was brave enough to meet me and a friend out at our favorite patio bar that Saturday where the frozen margaritas hit me a little too hard that night. He claims he knew from the moment he met me – love at first (and second – ugh I’m not proud of it) puke! 😆

Cole has told me repeatedly that he knew he wanted to marry me as soon as he met me. It took me a week of “slow rolling” (term Cole prefers over ghosting 😂) him to figure out I couldn’t let him get away! We each brought a dog into the relationship – I have a rescued German Shepherd/terrier mix and he has a purebred German Shepherd. It helps that they’ve bonded and act like total brothers! We love taking weekend trips into Texas hill country with the dogs who travel so well together. We had booked a week in Colorado through Airbnb staying at a remote cabin (covid safe) just us and the dogs. The night before we left for our 16 hour drive (it wasn’t as bad as it sounds!) he kept grumbling about the car top carrier and how he didn’t like that we packed it (plan was to leave at midnight) and left it in the driveway for anyone to “break in to.” Come to find out he had packed the ring in his backpack…and put it on top of the car in the carrier…men (sigh). The ENTIRE drive out he kept asking me to look out the window and make sure the carrier was secure. I’m sure he breathed a big sigh of relief when we made it to the cabin.

The next day, he was visibly distracted – he just couldn’t relax and kept busy around the cabin. I found out later he had reached out to my siblings (5 of them) that morning and let them know his plan so they were all on standby to celebrate! And he had talked to my mom at Christmas last year and told her his intentions (my Dad passed away from stage 4 cancer in June of 2017) so she knew (and excitedly “approved”) before anyone else did!

Cut to the amazing Colorado sunset that evening – we were sitting out on the little deck enjoying the views and he had sneakily set up the GoPro to capture the moment! He picked the perfect time of day as the sun was setting to ask me to spend the rest of my life with him! Obviously I said yes…and here we are, a year and a half after meeting and planning a WEDDING. Thanks, Bumble (and Eight Row’s Frozen Margs)!! 😊

Home
>
Marriage Proposals
>
Kate and Cole
Proposal Videos
Check out some of our favorite proposal videos
Ring Quiz
Find the perfect ring for you!