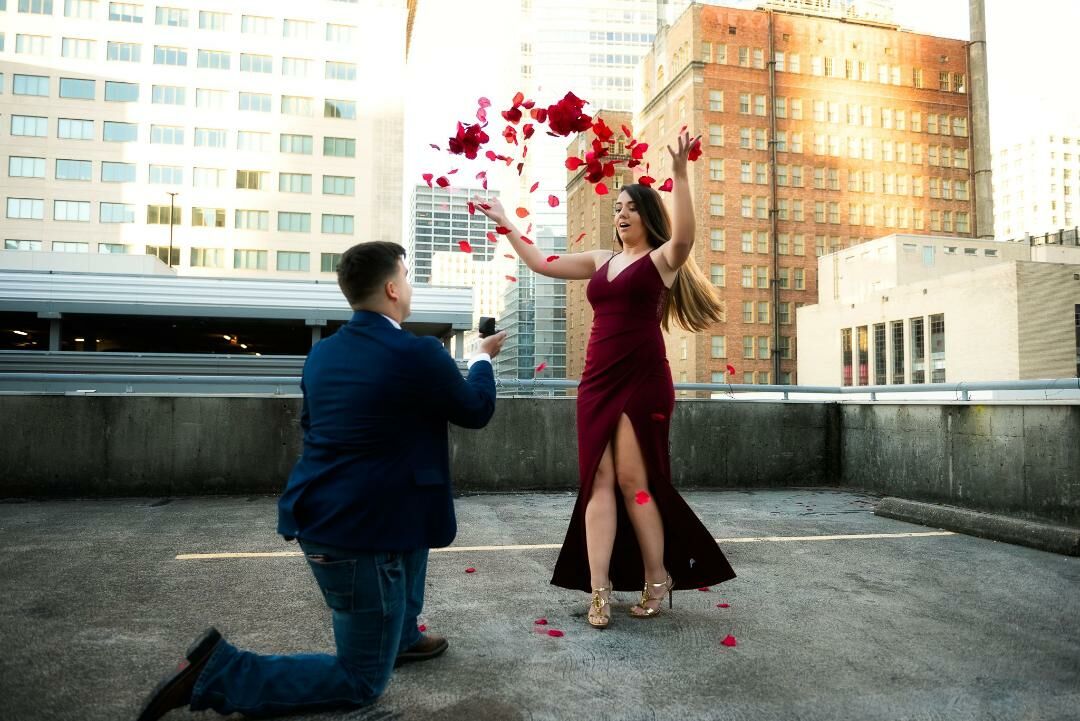 We met through a dating app after both getting out of bad relationships. Plus we were both working 3+ jobs and going to school full time as well. On our first date we went to the movies then to his favorite restaurant… Waffle House. WE were having such a good time we ended at walmart slow dancing in the parking lot.

Originally he had planed to propose on our Paris trip, booked a photographer for the whole day and everything. However thanks to covid our trip got pushed back to April. We were both pretty upset about it. I figured he would just wait, but boy was I wrong. He had messaged me Monday morning asking if i had a maroon dress I didn’t. So we ended up going dress shopping on Wednesday. Still couldn’t find anything like the picture he planned. So when he was off work he kept looking for me. I was a little suspicious because the dress he was looking for was a little fancy for just fall pictures. But he reassured me it was just to make them “classy”. Well the night before I had some family stuff happen and was not in a good mood. He offered to pay for my nails to be done but I just wanted to spend time with him. We ended up not hardly sleeping which made me miss my alarm, but I actually set it for 4:30 pm instead of am. We woke up at 6 and I was a tad frustrated because I wanted to curl my hair but he reminded me that either way I was beautiful. While getting ready he grabbed me a red bull and got the car ready. On our way to the site he played our play list songs, just a bunch of love songs we have sent to each other through out the years. Once we got there we took some practice pictures then the photographer asked for him to do the shout out really quick. Still I was unaware of what he really was doing. Once they came and got me we took a few more pictures then the photographer suggested to turn and throw petals in the air. We practiced some more because its hard to turn like that in heels. Once everything was ready I turned on 3 and he was on one knee. I cried, laughed and was in complete shock. He is my best friend, my sun and all my stars. Now to just get married before he possibly deploys!

Home
>
Marriage Proposals
>
Kaitlyn and Andrew
Proposal Videos
Check out some of our favorite proposal videos
Ring Quiz
Find the perfect ring for you!