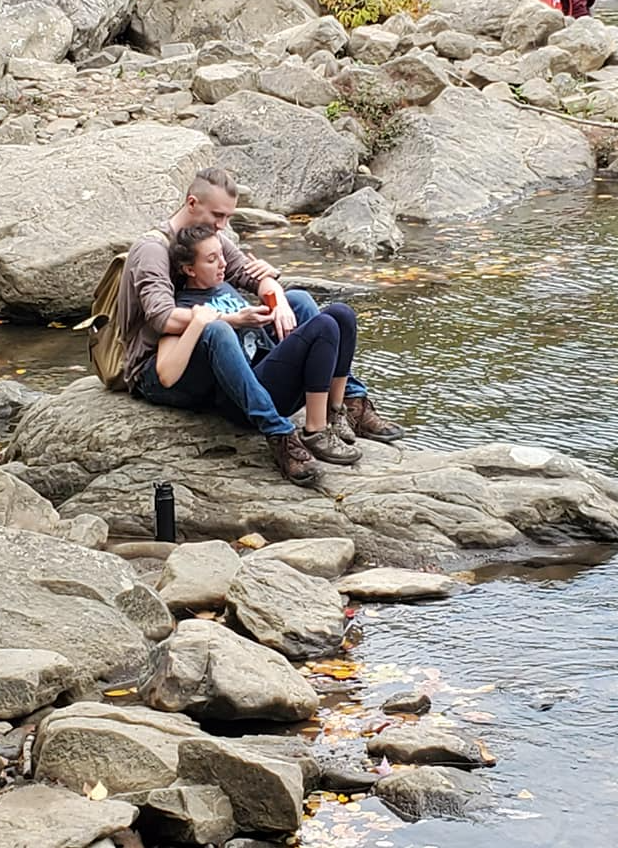 It was one long night at a college bar. I, the bride, was dancing on a platform looking out into a sea of college students. The groom, who was at the bar saw the me dancing and was building up the courage to make his way over. With the threatening support of his dearest friends, he made his way over. As the met eye level, unimportant creep tried to start danicnig behind me. Jared thought the face I made was for him, which sparked a conversation in a very loud bar. Jared won my heart when he got low and wasn’t afraid to make a fool of himself dancing. As we closed out the bar, we exchanged numbers where I found out his name was not Derrick and scheduled our first date on Halloween.

Living in Philadelphia during this pandemic with no car was brutal. With a group of friends we planned a long weekend camping to get away from the city. Jared had the ring on him in case there was a right moment. I almost saw the ring when packing to go hiking but I was trying to downplay this trip to not get my hopes up. We went on a trail that was suppose to have beautiful waterfalls. Well with the lack of rain, there was not many and not as big as it was advertised. We made it out to the river where it was a beautiful scene of changing leaves. We sat on a rock and started conversing. I heard his heart beating faster and I knew something was up. He pulled out the ring and asked me if I wanted to “do the thing” (legend of korra reference).

Home
>
Marriage Proposals
>
Jordyn and Jared
Proposal Videos
Check out some of our favorite proposal videos
Ring Quiz
Find the perfect ring for you!