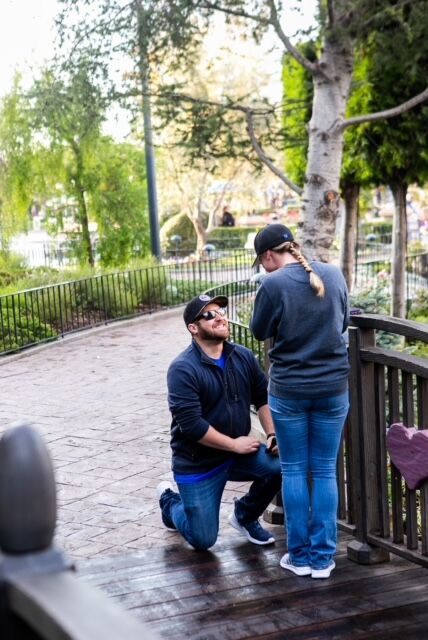 My sister and Austin’s best friend were dating and we had started to hang out in the same group of friends. At a New Year’s Eve party we were each other’s New Year’s kiss and have been inseparable since then.

I had planned a surprise trip to Disneyland as his Christmas present. I had told him we were going to Vegas and he didn’t seem to excited. Well apparently our families found out he was proposing and told him about my secret (thanks family). So he ended up going along with it knowing I was actually surprising him with a Disney trip. When we arrived at the freeway split I told him we were going straight to Disney instead of Vegas and he acted so surprised. The next morning we were first in line and he asked if we could take a picture in front of castle since there weren’t a lot of people and I said sure. One we were at the castle he asked his dad to use the Go Pro and capture us looking at the castle for our vacation video. Well as soon as he started talking I knew what was happening and grabbed his shirt so tight he had to move my hand away just to get the ring. He dropped to one knee and asked me to marry him. I said yes with tears of joy and happiness. There happened to be a professional photographer nearby waiting for another couple and she captured the moment. It was the perfect moment for me.