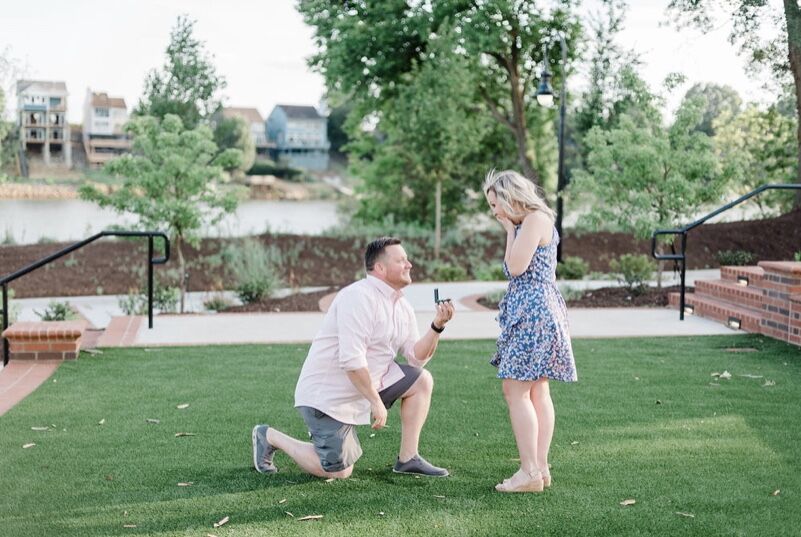 John and I met 11 years ago in our apartment complex. We were neighbors and turns out we had mutual friends.

Turns out the plan had been brewing for months beforehand. My best friend had taken a traveling nursing assignment and moved to Baltimore for a few months. He wanted to have her there because he knows how important she is to me. So he had been in conversation with her planning the perfect day that she would be back in town. Meanwhile, they were building an amphitheater on the river that we would ride our bikes at. He would ride by almost everyday after work and ask the construction crew when they were going to be finished because he knew that’s where he wanted to propose. So the weekend he had planned was finally here, he had the ring for nearly three weeks and it was killing him. He said I don’t know how many times he almost proposed waiting on the day to finally get there. Anyways, I was a little bummed that I knew my best friend was coming home and I wasn’t able to see her because she already had plans with her family. So John offered to take me to dinner at a nice restaurant near the river that I had been wanting to try in hopes of cheering me up. So we get down by the river and we’re walking towards the restaurant and he tells me that we have a few minutes before our reservation so let’s just go check out the progress on amphitheater so we aren’t waiting in the lobby and we can socially distance from everyone else. So we walk down to the amphitheater and we’re chatting and we sit and are chatting and it’s time to head back to the restaurant for our reservation, when we stand to go back, he drops to one knee and proposes. After I say yes of course, I realize there’s a strange man who keeps taking pictures. John had hired a professional photographer to be there and capture the whole thing. THEN I see my best friend step out from where she had been hiding, of course I’m overwhelmed with emotions at this time and embrace her, just to see my parents pop out of where they had been hiding. John made sure he had all of the important people to me there to witness such a special moment. I couldn’t have asked for a more thoughtful proposal.

Home
>
Marriage Proposals
>
Jenn and John
Proposal Videos
Check out some of our favorite proposal videos
Ring Quiz
Find the perfect ring for you!