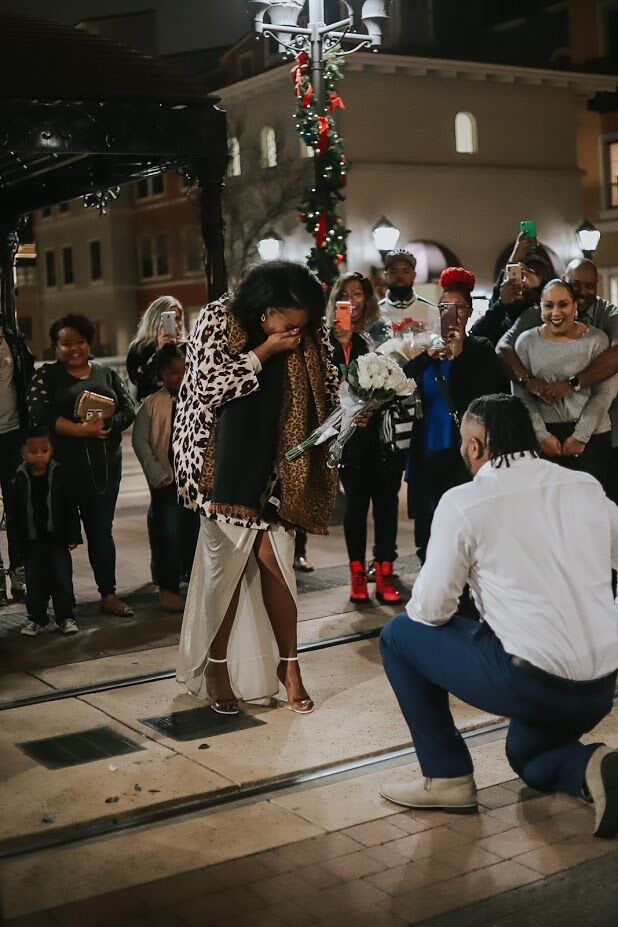 Darius was the new drummer for the church that my family and I attended. My family and I had been attending this church for over 10+ years. Every Sunday, Darius and I would accidentally lock eyes. After a while, it because a game of “Catch the other starting” One day, while at a church event that I had planned for the youth, Darius finally decided to talk to me. He came up to me and started talking to me. We laughed, worked, and exchanges numbers. We talked every day for hours, from text messages to calls. It was great to have someone who just clicked with me. A few weeks after that, he asked me to be his girlfriend, and we have been together non-stop for five years.

A few days before the engagement, Darius told me that they had to go to a surprise anniversary gala/party for our close friends. The day before, he sent me out to find a dress and to get pretty. On the day of the event, he picked me up from my house. We drove around the city because I love riding around town with him. When we went to the location, a hotel that I also told him about because it was so unique and beautiful, he valeted the car. I went joined a friend in a seating area, who was also there for the party. Darius went ahead to get us a seat. After a few minutes, the friend and I starring walking up the large staircases that would take us to the venue. As I got closer to the top, I could see the heads of people standing at the gazebo. They all looked familiar, but I thought nothing of it because we were all here to celebrate the same friends. However, As I walked close to the venues, the crowd started handing me red roses. That’s when I knew something was happening, but it didn’t click that it was a proposal. As I walked through the crowd, I noticed all the people were my friends and loved ones. As the crowd parted, my best friend was in middle school was there with roses; after her was pastors, my siblings, my mom, and then my dad. They all handed me roses. Then there was Darius. He was standing with a few dozen white roses. He hands them to me and slowly goes down on one knee. At the moment, I was overwhelmed with tears of joy, and he proposed. His proposal was a complete surprise and helped pull me out of depression from missing my friends and feeling like I was living on pause. January 1st has always been a restart for us, a fresh start for a better us. Everything was perfect. Those who were there so watched live on social platforms and who viewed the engagement video still comment on what an amazing job he did on this day.

Home
>
Marriage Proposals
>
Jenell and Darius
Proposal Videos
Check out some of our favorite proposal videos
Ring Quiz
Find the perfect ring for you!