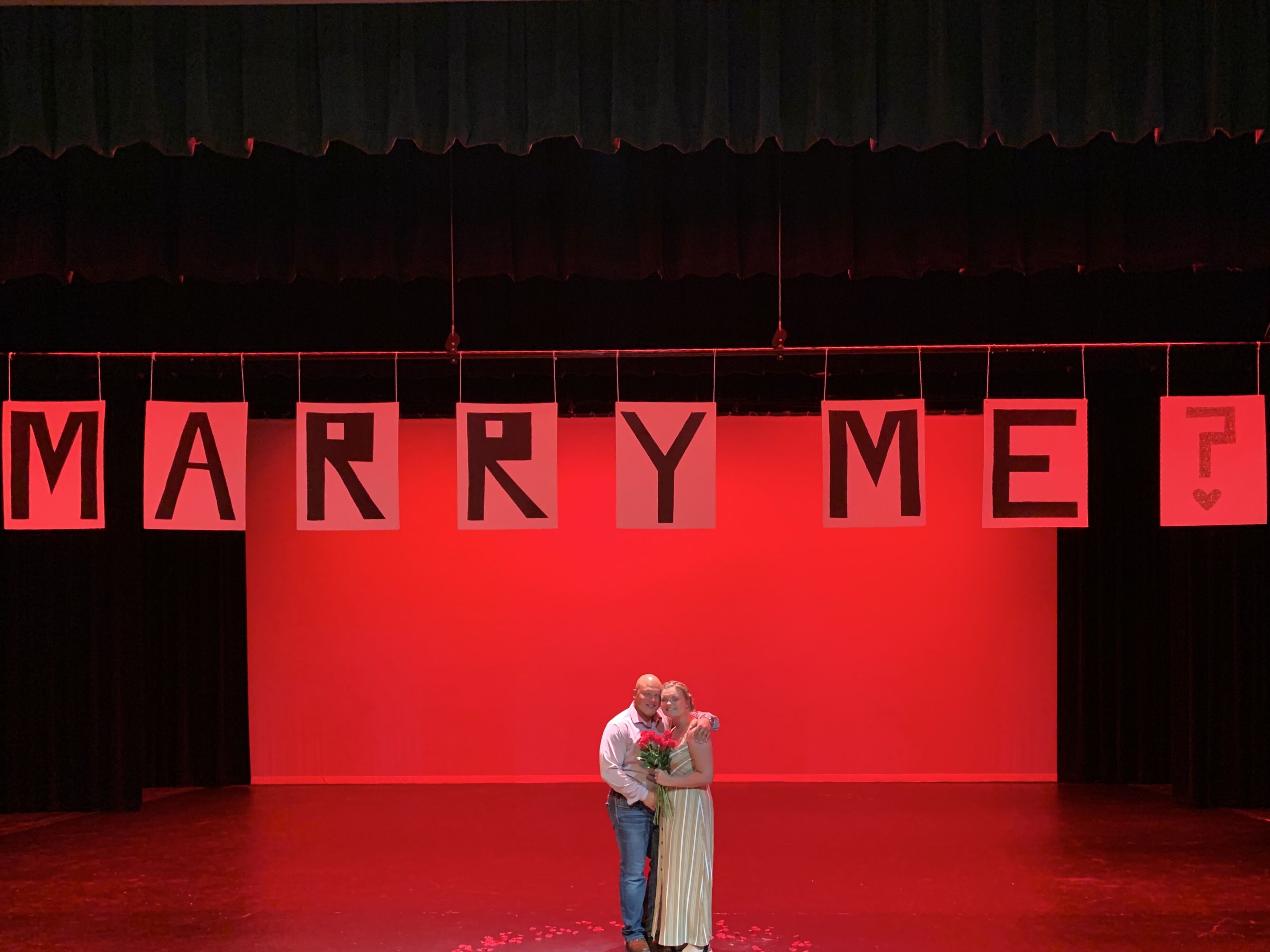 We met at a birthday party when we were 13 and 14, but we really got to know each other at school in the theatre program. He asked me to be his girlfriend on February 5th, 2014 backstage.

I am the theatre director at Santa Fe High School in Santa Fe tx. We both graduated from there. In 2018 I was finishing up my degree and I decided to go out on a limb and switch to teaching. I applied on May 16th, May 18th the unthinkable happened. A student opened fire in our old high school where we made so many of our memories. My little brother and our old teacher who we are very close to were inside. I knew my job just became 100x harder. I started teaching there the following year. My first two years were very difficult but my sweet boyfriend always reminded me how important my job was and what a good job I was doing. Fast forward 3 years. In high school, our very first musical was The Wizard of Oz, and I played Dorothy. It was one of the ways I and my now fiancé rekindled was because he saw me on stage. Now I’m the director and for the 10 year anniversary, we are re-doing the show. Before school started I got a call from our old director who is now an assistant principal saying they wanted to do an interview with me and him about the anniversary show. He had very specific instructions, but I was so excited to share our story and get ready for the show I never noticed anything suspicious. We entered the front of the auditorium and I noticed a rose in the door handle. I thought that’s weird, we had a dance show in here a couple of weeks ago but how would it still be alive? Once I grabbed it I put everything together and told my old director that he was a dirty liar. I opened the auditorium doors to see my fiancé center stage in a circle of roses. Music and lights came on and there was a rose on every step going down to the stage. Once I got to my fiancé, he told me how our story began in that very auditorium 7 years ago when he asked me to be his girlfriend backstage during our musical production of Grease and now we are taking our next step here as well. As he got down on one knee the marry me signs flew in from the fly loft where we hang the backdrops. I had always imagined getting proposed to in the auditorium but never told him that. I guess he just knew. Our old director is now the officiant at our wedding and we couldn’t be happier. He said he had plans to do it during our final show of the year, but of course, covid messed that up. I am so blessed to work in such a special place every day and bring joy and growth to students who have gone through so much!

Home
>
Marriage Proposals
>
Haley and Serrick
Proposal Videos
Check out some of our favorite proposal videos
Ring Quiz
Find the perfect ring for you!