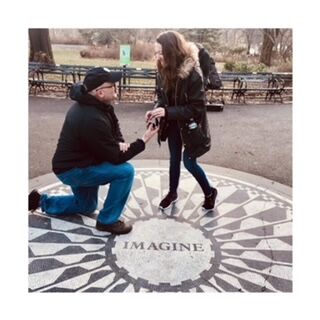 We met at our mutual best friend’s home in the fall of 2015. I went there to watch a football game, as did Kris. I remember liking Kris the moment I saw him. We spoke a lot that day and had a lot of interests and friends in common though neither of us had ever met one another. We kept in touch and ended up dating seriously later that spring.

We were in New York City for New Year’s which generally follows a trip to visit his parents in the Catskills. We decided to visit the Met during the day prior to going to a concert with friends. None of our friends we traveled with were interested in going to the art museum which should have struck me as odd but did not at the time. The museum was really crowded that day and Kris seemed distracted the whole time. I remember him sitting on a bench inside feverishly texting on his phone while I went to look at the Degas and Van Gough pieces. We left the museum and he was acting odd but I still wasn’t expecting anything. I stopped and got a pretzel and he noticed some magnets for sale at a small vendor outside. He was dead set on purchasing a magnet with a painting of the Bow Bridge in Central Park. With pretzel and magnet in hand, we set off towards the bridge (for the record, I have not sensed direction, especially in Central Park). Upon arriving at the bridge, an NYPD officer was directing people to a detour path as the bridge was closed for fireworks. We still laugh at the officer screaming “Bridge is closed. FIREWORKS.” So, Kris is acting even odder and is on his phone feverishly looking at a map and/or texting. Finally, we make our way towards Central Park West and he asks if we could visit Strawberry Fields. Having no idea where I was in Central Park or what he was up to, I agreed and we made our trek to Strawberry Fields where a large group of people was standing around the imagined circle. As is customary, I asked if we could take a photo but he was stalling and acting odd (and waiting for a good moment). When that moment came, he passed his phone to a really nice Australian gentleman to take our photo. I started to kneel down for the photo (to get closer to the image tile work) and Kris told me to stand up. I was confused and when I looked down he was kneeling with the ring in his hand. Everything is blurry past that point but I do remember being shocked, ecstatic, everyone clapping, and the Australian gentlemen snapping photos at rapid speed. It was a total surprise and I am so happy I did not expect the proposal. It was really special and I love telling this story. Apparently, everyone we know at home knew this was going to happen except for me. Our friends we were within New York were tracking our social media and locations to see when and if it had happened as it was unfolding. I love this story and I love Kris.

Home
>
Marriage Proposals
>
Emily and Kris
Proposal Videos
Check out some of our favorite proposal videos
Ring Quiz
Find the perfect ring for you!