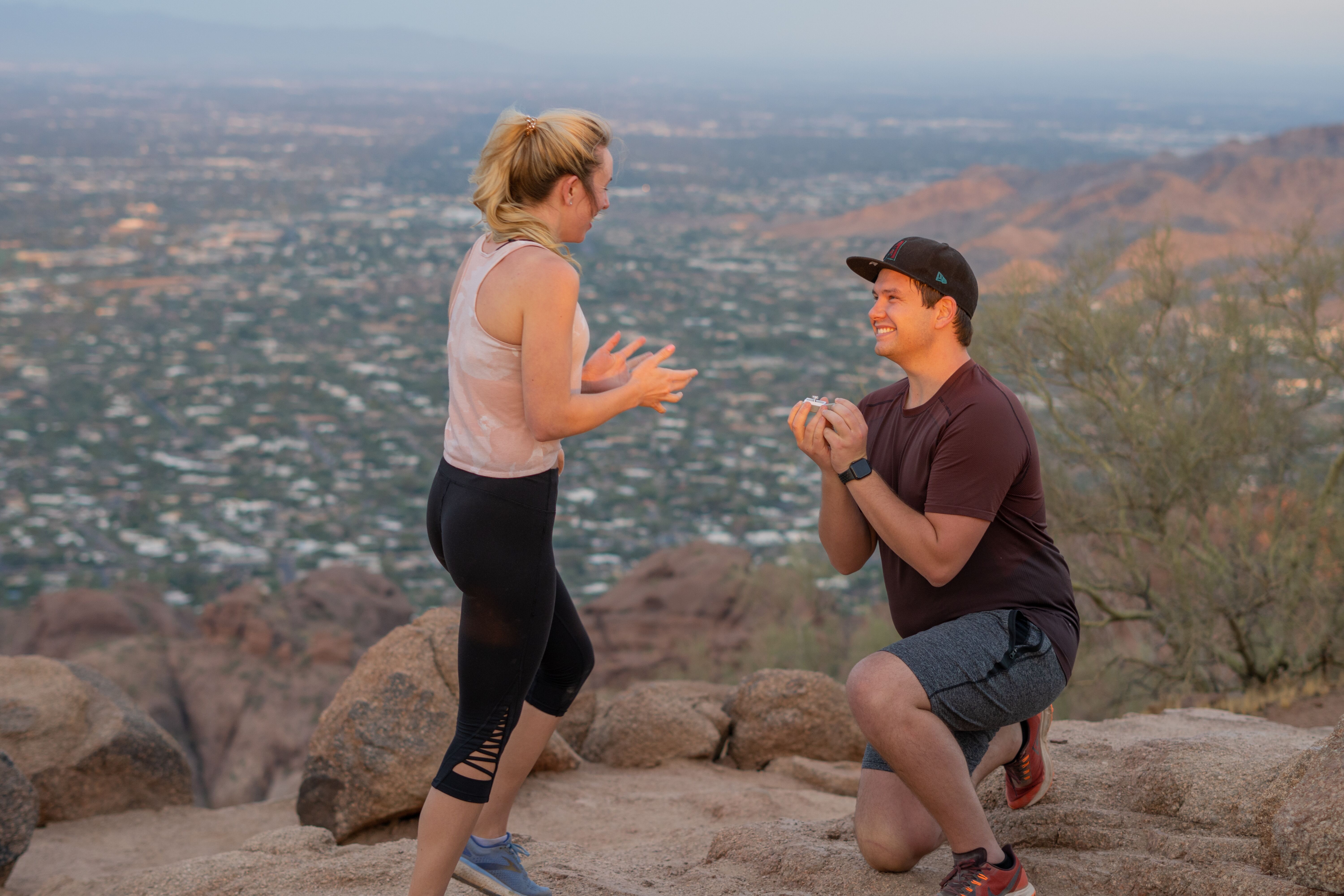 We met in 2013, our sophomore year of college while studying abroad in London for the semester. We realized we were both from Colorado and hit it off traveling in the same groups. From the Parthenon in Greece to the Guinness Factory in Dublin, we connected over sharing crepes and catching the next train. I returned home early to complete my science curriculum but later in before our senior year, we had a fateful reconnection when invited to a birthday party by a mutual friend. I kissed him that night and our relationship took off after with a strong first date at Chick-fil-A the next day. We haven’t looked back in 5 years of graduating from Pepperdine together, navigating our first post grad jobs together, and making the move to Arizona as I was accepted to veterinary school. Now in my final year, I’m honored to take his name as Dr. Ault this June!

Zach secretly arranged a sunrise hike to the top of Camelback Mountain with our best couple friends, Nikki and Josh. He woke me up at 4am on Saturday and I resisted the whole way, rolling out groggily to the car with a bare face and the first hiking outfit I could get my hands on in the dark. I was totally oblivious to the fact that Josh brought his nice new camera because he “just wanted to play with the settings to take nice sunrise shots.” It is a brutal ascent to the top, not to mention one side of the mountain is closed so we had to take the more difficult trail! As the morning light was becoming pink and we neared the summit, Zach’s heart rate tracking reached 192 bpm and I thought “wow, COVID has really gotten us out of hiking shape.” Little did I know it was the nerves! In the golden light just after sun came up, Zach took my hand as if to pull me closer but then said “Lanie” and I looked up to tears in his eyes. I thought “Hmm it’s windy up here but it’s not that windy…” and he knelt as he said “I want to be with you the rest of my life. Will you marry me?” and opened a box holding my dream pear shaped diamond ring! The whole host of other sunrise hikers clapped and cheered as I squealed yes! and buried my face in his chest. I was floating on air and couldn’t stop giggling to myself the whole way down. I wouldn’t trade the moment of 100% surprise for anything, chipped nails and all.

Home
>
Marriage Proposals
>
Elena and Zachary
Proposal Videos
Check out some of our favorite proposal videos
Ring Quiz
Find the perfect ring for you!