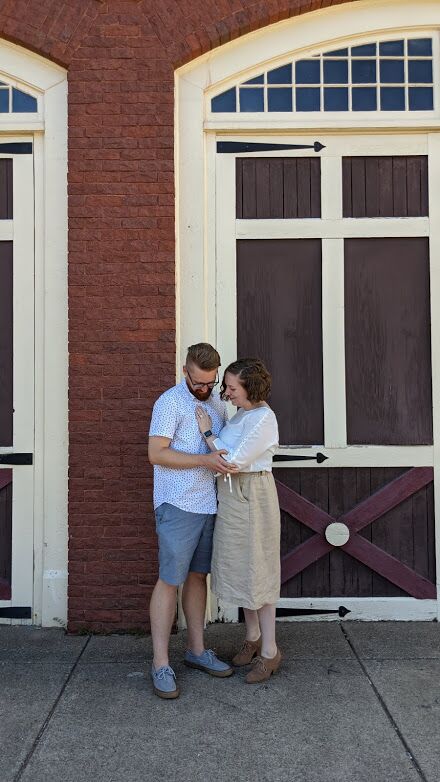 Rob and I met in January 2017 at a read through for the musical South Pacific, which we were both in at the local community theater. I had recently moved to the area, and was so nervous about not knowing a single person in the show. At first, he sat two seats away from me. However, he quickly moved and started a conversation with me. Later, he told me that he was sick of wasting opportunities, and that he was not going to miss this one. Although at first I thought “Who is this crazy person talking to me?!” I am so glad he did.

Rob asked me to marry him in the very spot we met. We were about to move to another state, and in the face of the pandemic we did not get to say goodbye to many friends or family in person. However, I had asked if we could go visit the theater one last time, just walk by it outside before we moved. Little did I know, Rob had arranged for the theater to be open to us. He proposed to me right on stage, where we met the first time, and have acted together several times since.

Home
>
Marriage Proposals
>
Cassie and Robert
Proposal Videos
Check out some of our favorite proposal videos
Ring Quiz
Find the perfect ring for you!