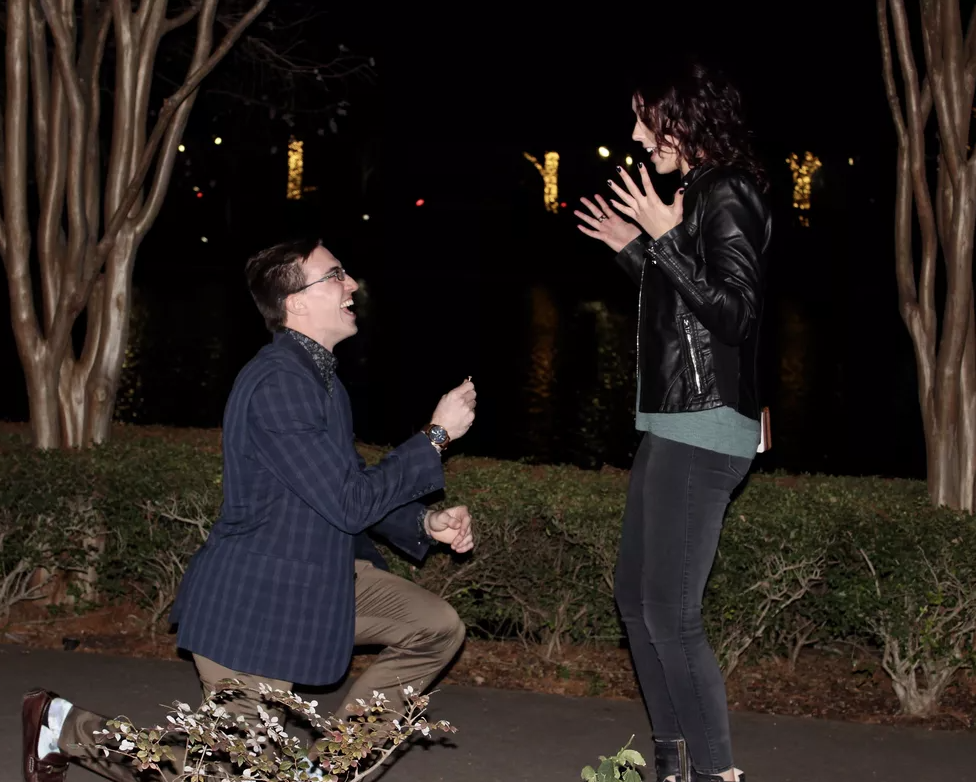 As all of the best relationships do, Stephen and Briana’s stemmed from meeting at a bar. Everyone was at West End off of Dickson Street in Fayetteville. Casey mentioned to Bri that she had gone to a fraternity function weeks prior where she met a hilarious guy that was the “guy version” of her and Bri (from a humor perspective and not a coordination perspective, obviously). She said she saw him at West End and wanted to introduce Bri to him, so she did. The interaction was brief and, a week later, Bri was still stuck on the fact that Stephen was the only guy she had met at the U of A who was taller than her. They saw each other at West End again on another weekend out on Dickson. They managed to spend more time together and got to know each other. At the end of the night, Bri offered to drive a few people home since she was the self-imposed designated driver. As she was driving Stephen home, they realized they were actually neighbors. Stephen insisted on walking Bri to her door, even though she was the one who volunteered to take him home and drop him off in the first place. They texted throughout the week and Stephen asked Briana on their first date that Thursday.

For their third anniversary, Stephen and Bri went to Perry’s to enjoy a Christmas Eve dinner. Bri noticed that Stephen was acting a bit odd, along with all of Stephen and Bri’s family in town acting stranger than normal as well (which she later found out was because the families were trying to hide an art piece Stephen was crafting last minute for Bri’s Christmas gift). Because of this, Bri was on high alert. The two drove to meet up friends in Plano to go out for a bit and see the Christmas lights. Casey wanted to get a few of the girls together to go to Scruffy Duffies before everyone had to leave town again after the holidays. This also seemed strange to Bri since she asked Casey to hang out the week prior, in which Casey said she was going to be too busy during Christmas to do so. As they drove to Plano, Stephen asked Bri to check on Casey’s ETA. When Casey didn’t answer her phone, Bri decided to check Find My Friends to figure out how close Casey was. When Bri checked, she noticed Casey’s dot had two other dots all at the same location. The two other dots happened to be Stephen’s mom and Bri’s mom (weird that they would all be going to a bar on Christmas Eve with Stephen and Bri’s friends, right?). When Bri made a comment about it, Stephen immediately turned bright red. They pulled up to the Shops and parked. In the middle of Stephen’s rehearsed monologue, Stephen’s parents were spotted trying to hide behind a storefront plant (way to blend in, guys). Bri really knew something was up at this point. They walked around the pond as Stephen continued laughing and talking, trying to be serious again. The most memorable line of the proposal was “there’s no one else in this world I’d rather spend my life with.” The reason being, Bri replied, “but what about Bradley?” Bri notoriously makes jokes when she feels awkward or uncomfortable. Stephen was slightly irritated when Bri brought up his brother during his proposal, but he decided to ask her to marry him anyway. Her reply was, “yes, but please get up before I start crying” (think of the makeup in the pictures, she worked hard on her look for date night). They celebrated with family and Bri’s closest friend (who takes credit for the two dating to begin with), Casey.

Home
>
Marriage Proposals
>
Briana and Stephen
Proposal Videos
Check out some of our favorite proposal videos
Ring Quiz
Find the perfect ring for you!