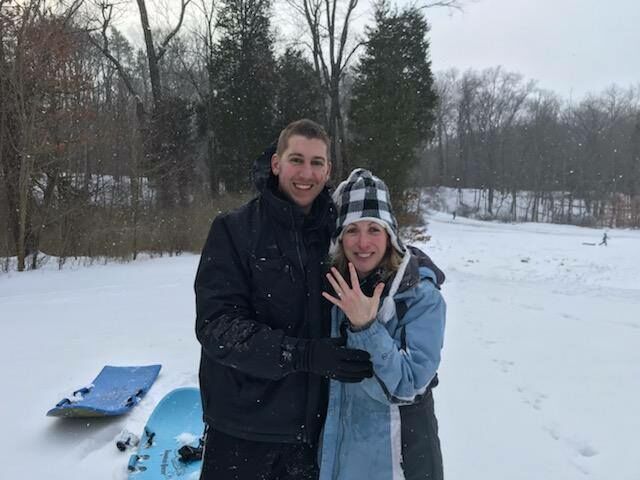 Eric and I met at college while attending a physical therapist assistant program. We were in different graduation classes but kept bumping into each other during lunch. The stars aligned for us in October 2017 when we both signed up for the Preventative Care Center (a hands on workshop for PTAs). The teacher put Eric in charge of my orientation that day which meant that we had the opportunity to exchange a more meaningful conversation. At the end of the class, I asked if he would be my exercise buddy as friends….it wasn’t until a friend told me he acted interested in me that I realized we both were interested in being more than friends. The rest is history.

Eric asked me to go sledding at the South Chagrin Reservation Park. I tried to convince him to go to a closer sledding hill because South Chagrin has a crazy hill. He was adamant that we had to go to that specific sledding hill (later he explained it was because he knew I loved to go walking in this specific park). On our last ride down the hill, we hit a bump the wrong way and tumbled off the sled, getting muddy. Eric suggested we head towards a bench to sit down. Right before we reached the bench, he faked a fall, and asked me to help him up. Instead of standing up, he took my hands and went on one knee. He told me, “This is a great time to practice my proposal.” I wasn’t sure if he was joking or being serious since he loves to joke with me all the time with a straight face. He then said, “Too bad I don’t have a ring,” and started to pat down his coat. He took out a ring and said, ” Never mind I do have a ring, will you marry me?” I should have said should I practice saying yes?…but I was nice and just said YES!

Home
>
Marriage Proposals
>
Amber and Eric
Proposal Videos
Check out some of our favorite proposal videos
Ring Quiz
Find the perfect ring for you!